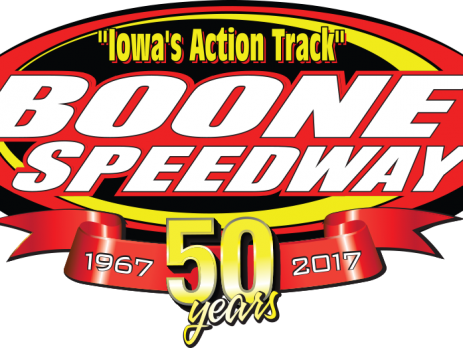 First wins to Havlik, Hildreth, and Rankin. Stofer, Logue and Stanton go back to back

June 10, 2017 It was a night of firsts as well as a night of repeats at the Boone Speedway Saturday night.  Three drivers took back to back wins, and four drivers took their first wins at the track this year, one in a class running for the very first time. The Mod Lites kicked off the night's feature racing, and this one went green to checkered for the full 15-laps.  Justin Rankin would lead the race from start to finish [...]

Bushore and Stofer go back to back, Kennedy scores first win

June 3, 2017 It was another full night of racing at Iowa's Action Track, the Boone Speedway on Saturday evening.  The IMCA Modifieds, Stock Cars, Northern SportMods, and Hobby Stocks, plus the Mod Lites were in action.  The IMCA RaceSaver Sprints had the night off. Starting the feature racing off was the Mod Lite 15-lap main event.  Mike Kennedy took the immediate lead from his outside front row starting spot, and he would then go on to lead every lap on [...]

5-29-2017 Boone Speedway held it's annual Memorial Day IMCA Deery Brothers Summer Series Late Model special on Monday.  Also running were the IMCA Stock Cars, IMCA Northern SportMods and the IMCA Hobby Stocks. The 40-lap Deery Brothers Late Model feature went to Jesse Sobbing.  Sobbing started third, chased leader Chad Holladay from early on in the race, and finally ran him down to take the lead at lap twenty-eight.  He then went the distance as captain of the ship, taking the [...]

5-27-17 Weekly racing continued at the Boone Speedway on Saturday night, though Mother Nature tried to put a damper on things earlier in the day.  Racing went on as usual despite the rainfall, with the six regular classes in competition. Things kicked off with the Mod Lite 15-lap feature.  Mike Kennedy led the early portion of the race but at lap six, it was Josh May taking over as captain of the ship.  May then pulled away to take the easy [...]

Due to the rain and cold weather, the races at Boone Speedway are cancelled for May 20.  See you next week!

5-13-17 The Boone Speedway saw new weekly winners emerge from all six classes on Saturday night, where fans enjoyed another beautiful night of exciting racing action. Charlie Brown won his first Mod Lite feature of the season.  Brown led the caution-free race from start to finish to earn his victory.  Bryan Zehm started tenth, and finished as the runner up.  Joe Glick came from eighth starting position to take third place, fourth went to Josh May who started tenth, and Randy [...]

5-06-17 After last week's rain out, it was back to Saturday night racing at the Boone Speedway.  Two drivers took their second win in as many weeks, while another driver, long absent from Victory Lane, stepped back into the winner's circle.  A total of 118 race cars were checked in for a great night of racing. Bryan Zehm claimed his second feature of the season in the Mod Lite division.  Early on in the race, Mike Kennedy caught leader Charlie Brown, [...]

4-22-17 Boone Speedway held its season opener on Saturday night and the pits were packed with 143 race cars.  There was exciting racing in all six divisions, that this year includes the Race Saver Sprints for the first time. The defending track champion in the Mod Lite division, Bryan Zehm, picked up where he left off by leading the entire 15-lap feature for the win.   Josh May chased  Zehm much of the latter portion of the race, but had to [...]

April 8, 2017 Boone Speedway hosted night #2 of the 2017 IMCA Frostbuster series races on Saturday night.  The fans were treated to some spectacular racing put on by the 146 cars, with drivers from nine states and Canada, that competed. Kicking off the feature racing was the 20-lap IMCA Northern SportMod feature.  Austin Luellen drew the lucky pole position for the start of the race.  He jumped to the lead,  but soon had Johnathan Logue and Jake McBirnie close on [...]