It was another weekly racing series night on Saturday at the Boone Speedway, with the Karl Chevrolet Dirt Trucks also in competition.  The drivers were eager for some racing action with 146 cars checking into the pits.  There were also nine 2-person Cruiser cars in exhibition with the duo of Jacob Beadle and Riley McWherter taking home the winning trophy.

Twenty-one My Race Pass IMCA STARS Mod Lites were the first up for feature racing.  This one turned into a runaway when last week’s winner Cody Yaw took over the lead on lap three and never looked back on his way to another feature win.  Yaw pulled away from his competition to secure back to back wins. Mike Kennedy started ninth, and finished as the runner up.  Third went to early leader Tim Glick, Doug Byers ran up front all race long and finished fourth, and Josh May was fifth.

The IMCA Northern SportMods ran their 18-lap main event next, ending it with a last second winner out of turn four.   Nic Runyan and Dusty Masolini dueled it out in the first eight laps, with Masolini finally getting the upper hand.  A dozen laps into the contest, it was Masolini fending off Ryan King and tenth place starter Izac Mallicoat.  The final laps found Mallicoat getting into the runner up spot and closing in on the leader.  As the white flag flew, Masolini was hoping for the checkers, but a slide up the track coming out of turn four looking at the checkers was just enough for Mallicoat to breeze under him, and take the thrilling win.  Masolini had to settle for second, Johnathon Logue, last week’s winner came from twelfth to finish third, fourth went to Ryan King, and Jenae Gustin started eleventh, and finished fifth.  This was Mallicoat’s second win of the season.

The Karl Chevrolet Dirt Trucks were an added attraction for the night’s racing.  Nine of the Dirt Trucks were on hand and they ran a 15-lap A main.  Pole sitter Bryan Spangler jumped to the lead, but sixth place starter Bill Davis, Jr. was tucked in behind him immediately.  Davis showed his nose under the leader, peeking for a way around which paid off on lap five.  Davis then motored off and took the easy win.  Dennis Plain came from seventh place to finish as the runner up.  Shonn Mapes, Bryan Spangler, and Jeff Johnson completed the top five. The race went flag to flag.

The defending IMCA National champion, Tom Berry, Jr. was in the house tonight, wheeling a brand new car.  He hadn’t lost a step from his successful season last year either, as he sailed home to another win.  He had to fight around early race leader Russ Dickerson, taking command just before the halfway mark of the event, and then distanced himself from the pack as the checkers flew.  It was a hard fought battle behind Berry, with Nick Roberts taking second over fourteenth place starter Cory Sauerman, Joel Bushore in fourth, and Russ Dickerson in fifth.

Devin Smith put another notch in his winner’s belt by taking the checkers in the 20-lap IMCA Sunoco Stock Car A main.  Early leader was Troy Jerovetz but eighth place starter Devin Smith was up to challenge with just a handful of laps in the books.   Three laps later, Smith took command, set sale like a rocket on top of the track, and was gone.  He scored a comfortable win on second place Jerovetz, while brother Donavon Smith came home in third place.  Last week’s winner Michael Jaennette started eleventh and finished fourth, and Anthony Goldsberry was fifth.  This was Devin Smith’s third regular season win of 2021, plus winning the April 3rd Frostbuster.

Eric Stanton, a driver who has often visited Victory Lane at the Boone Speedway in years gone by, finally made his way back there after taking the checkers in the IMCA Hobby Stock feature.  Stanton came from eleventh starting spot, and ran down early leaders Shuan Wirtz and Carter Koop at lap nine to take the lead.  A late caution changed things up when Koop lost a wheel, bringing out a yellow, and putting him out of the running.  On the restart, Stanton was taken by surprise when a couple of drivers lurking in the wings….Braden Richards and Wayne Gifford both flew around him.   Stanton however gathered back his composure  and grabbed back the lead with two laps remaining, keeping it to the checkers and the win.  Gifford took the runner up spot, Richards went third, Solomon Bennett was hard charger, coming from eighteenth to finish fourth, and Shaun Wirtz rounded out the top five.

Next Saturday, May 29 will be another regular Saturday night series of racing with hot laps at 5, and racing at 6.

Memorial Day, We are Racing! 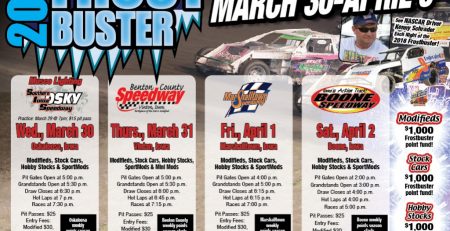 July 24, 2010 Pleasant weather brought out the fans and the racecars at Boone on Saturday night.  There were 145... read more