The Boone Speedway sprang back to life for the first time in 2013 with the running of their annual Frostbuster special on Saturday night.  The IMCA Modifieds, SportMods, Stock Cars and Hobby Stocks were 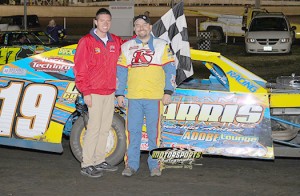 on the program. The fans witnessed 3-4 wide racing most of the night, and with over 190 cars checked in, there was plenty of exciting racing action to be seen.

The SportMods kicked off the feature racing with a 20-lap main event.  Audubon, Iowa driver Jared Hansen fought off the challenges of Madrid’s Andy Tiernan until lap thirteen when Tiernan took the lead.  It was clear sailing for Tiernan then as he drove to the victory.  Hansen held on to score a second place finish ahead of Ty Luellen in third.  Rockie Caudle came from row five to score fourth and Cory Rose came from row six to capture  fifth place.

The IMCA Modifieds ran a 25-lap feature.  With sixty-one cars on hand, it took three B mains to whittle the starting grid to 24-cars. The drivers were not only racing for $1,000 to win, but the event was also a qualifier for the 2013 Fast Shafts All-Star Invitational ballot.  Cale Sponsler quickly jumped to the point with Jimmy Gustin in tow.  The two drivers put on a show for the fans with Jimmy Gustin finally making the pass on Sponsler at lap fifteen.  Gustin would maintain the lead and drive to the victory; Sponsler keeping second place.  Third place went to Wisconsin driver, Jeremy Christians, Mike VanGenderen came from row five to finish in fourth, and rounding out the top five was Luke Wanninger.

The IMCA Stock Cars put on a thrilling 20-lap race.  Craig Carlson, Madrid, Iowa led the opening laps of the event, only to have his machine come to a halt in turn four at lap ten.  The lead was then handed over to Dusty Vis on the restart, as cars then scrambled 3-wide all over the track for position.  Wayne Gifford, who started twelfth, came through the fray to gain the lead with four laps remaining, holding it to the checkers and the win.  Mike Goldsberry took the second spot, while third place went to Jerry Gifford.  Fourth place finisher was Michael Murphy and earlier leader Dusty Vis, finished in fifth.

The 15-lap feature for the Hobby Stocks finished off the evening’s racing action.  Edgerton, Minnesota driver, Trevor Holm took the lead on lap one and never looked back, as he scored himself an Iowa victory.  Shane Slezak, Lincoln, Nebraska took second.  Tyler Pickett came from row five to take third place, fourth went to Shawn Slezak from Milligan, Nebraska and Richard Yaw II finished in fifth.

Next Saturday, April 13, will be the first night of regular weekly season point racing at the Boone Speedway.  Hot laps at 6:45 pm and racing at 7:30. 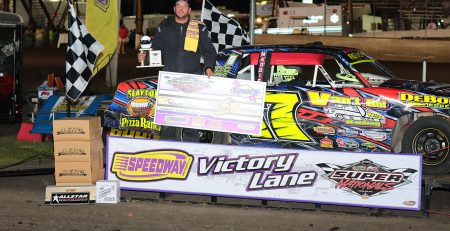 BOONE, Iowa (Sept. 6) – After being challenged early for the lead, Trevor Holm ran away with the Tuesday... read more

Getting a Kick out of Racing!

June 19, 2010 was Soccer Night at Boone Speedway, bringing kids in full uniform for free admission to the... read more

Transponders are mandatory for all Modifieds, Stock races

BOONE, Iowa – Transponders are required again for all Modified and Stock Car competitors at the IMCA Speedway Motors... read more