After last week’s rain out, it was back to Saturday night racing at the Boone Speedway.  Two drivers took their second win in as many weeks, while another driver, long absent from Victory Lane, stepped back into the winner’s circle.  A total of 118 race cars were checked in for a great night of racing.

Bryan Zehm claimed his second feature of the season in the Mod Lite division.  Early on in the race, Mike Kennedy caught leader Charlie Brown, and while vying for position, got together, sending them both out of the game.  From there on, it was Zehm’s race, taking the checkers for the time in 2017.  Zehm came from eighth starting spot to claim victory over second place Josh May.  Third place was Joe Glick, fourth went to thirteenth place starter, Joel Keenan and fifth was Kevin Grisham.

In the IMCA Northern SportMod A main, defending track champion Johnathon Logue got back to his winning ways, sending his #69JR under the checkered flag first.  Randy Roberts came from twelfth starting spot, to take the runner up position.  Third went to eighteenth place starter, Chad Ryerson, fourth was Tom Egenberger, followed by Dusty Masolini in fifth.

The “new kids on the block” this season for weekly racing, the IMCA RaceSaver Sprint Cars were up next.  This one was led from start to finish by Tyler Thompson.  Thompson, out of the capital city, started on the pole and drove away from his competition.  A caution at lap 11 involving several cars, and calling for a subsequent restart, did not deter his march to the checkers.  Michael Johnston took second place, Michael Houseman was third, fourth went to Bob Hildreth, and Michael Moore was fifth.

It was Jimmy Gustin for the win in the IMA Modified event.  Gustin led from the drop of the green as he sailed to his first victory of the season at Boone Speedway.  Mike VanGenderen ran down the leader, but had to settle for second place.  Eric Elliott was third, and with a lot jockeying for position, it was veteran Denny Pittman finishing fourth ahead of Russ Dickerson in fifth.

A driver who has been around the Boone Speedway for many laps finally was able to step into Victory Lane in the IMCA Stock Car class.  Veteran racer Craig Carlson was elated to take the win after many year’s absent.  Josh Daniels finished in second, Justin Nehring was third, Donavon Smith came from deep in the starting field to finish fourth, and Kevin Opheim rounded out the top five.

The second racer to claim his second feature win of the year at Boone came from the IMCA Hobby Stocks…Aaron Rudolph.  Rudolph kept working his way to the front of the field during the feature, and eventually got the lead to take the win.  Solomon Bennett took the runner up spot, hometown driver Dustin Graham was third, followed by Chris Cox and Todd Bass in fourth and fifth respectively.

Racing continues at the Boone Speedway next Saturday night when the green flag drops at 7:30. 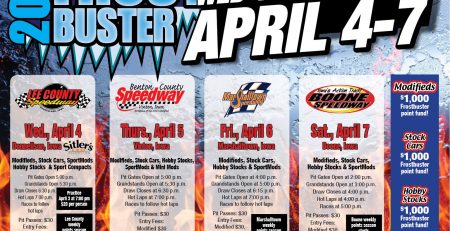 Come and join us for the fourth and final night of the 2018 Frostbuster.  Modifieds, Stock Cars, Sport Mods... read more