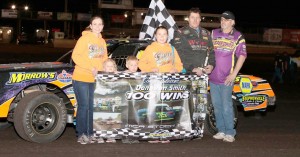 It was season opening night at the Boone Speedway on Saturday, with points awarded in all classes.  Close racing in all divisions made for an excellent night of competition.

Mod Lites found Joe Glick in the winner’s circle after their 15-lap feature.  Glick would lead this one from start to finish, but the racing behind him was a battle.  Charlie Brown would just get by Randy Bryan on the last circuit as they went second and third.  Fourth was Cory Sauerman and Joel Huggins rounded out the top five.

By luck of the opening night redraw, Jonathan Logue was the recipient of the pole starting position for the 18-lap IMCA Northern SportMod feature.  He would stay in that #1 spot the entire time on his way to the win.  There were fierce battles waging behind him for position much of the race.  Austin Luellen took the runner up spot after he won the duel with Jake McBirnie, who finished third.  Fourth went to eleventh place starter Randy Roberts, winner of last week’s Frostbuster, and Andy Tiernan was fifth.

The IMCA Hobby Stocks had a hard time getting underway with a couple of initial starts called back.  When they finally did go green, they continued the rest of the way caution free.  As luck would have it, Eric Stanton, last year’s track champion, would draw the pole position for the start of the 12-lap event. He had no trouble in keeping that top spot all the way to the checkers flying.  Derek Hodges finished a distance behind in second.  Dustin Graham took third place, and Shannon Anderson and Aaron Rudolph were fourth and fifth.

The IMCA Modifieds ran next with their 20-lap A main.  John Logue established the lead at lap one but it was but a short time later that he had Jon Snyder to contend with.  The two would then go at it, swapping the lead back and forth until a caution flew at lap eleven.  Snyder had gotten around Logue to claim the lead as the race restarted, with Matthew Meinecke and Jimmy Gustin waiting in the wings.  The race continued caution free to the finish, with Snyder snatching up the victory.  Jimmy Gustin started sixth, and finished in second, just ahead of John Logue in third.  Fourth went to Russ Dickerson who had started seventeenth on the field, and tenth place starter, Matthew Meinecke completed the top five.

The always exciting IMCA Stock cars capped off the night’s racing with their 18-lap feature race.  They too, had a hard time getting underway with two initial starts

called back.  When the race did begin, pole sitter Rod Richards jumped to the lead, only to have Brandon Pruitt snatch it away.  When a caution flew at lap five, it was now Terry Pruitt at the helm, Opheim was second and Smith had moved to third and Brandon Pruitt had dropped back to run fourth.  The scrambling began once again as the race went green, and soon it was Smith putting pressure on leader Pruitt.  Smith’s persistence paid off as he made the pass for the lead on lap nine.  From there on Smith stretched his lead, taking the comfortable win over Kevin Opheim, a distant runner up.  Terry Pruitt finished in third, Rod Richards took fourth and Brandon Pruitt was fifth.  Smith may have had a little extra adrenaline flowing on his way to the front, as the night marked his 100th career Stock Car win.

Regular weekly racing continues next Saturday night, April 23, with hot laps at 5:45 and racing at 6:30.

August 31, 2019 A whopping 323 cars checked in to the Boone Speedway for the running of the Wild Rose... read more