Dylan Thornton wins at the wire, Smith and Stensland repeat

Dylan Thornton wins at the wire, Smith and Stensland repeat

It was another regular Saturday night series of racing at the Boone Speedway with the IMCA Northern SportMods getting some extra action.  There was an Elmquist Towing top 12 Dash for Cash, and a Walters Sanitary Service Trash Dash for the next 12 heat qualifiers.  A first time winner would emerge from the Modified ranks when Dylan Thornton won by inches at the wire.  Donavon Smith repeated his IMCA Stock Car win from last week, Johnathon Logue took the comfortable win in the IMCA Northern SportMods, and David Rieks stepped into victory lane for the first time in several years when he won the IMCA Hobby Stock main event.  Travis Stensland made it two in a row when he walked away from the field in winning the Mod Lites.  Cruiser car action also returned after a two week absence, and there was a new duo of winners with Jadon Dougan and Austin Dodds getting the win.

Travis Stensland repeated his win from last week, as he led all fifteen laps of the Mod Lite A Main.  He grabbed the lead immediately and then walked away from the field.  He won by a straightaway in the race that went flag to flag.  Bryan Zehm finished a distant second, Jeff Stensland was third, Randy Bryan took fourth place, and Mike Kennedy rounded out the top five.  Stensland won for the second week in a row.

In the eighteen lap IMCA Northern SportMod feature, it was Chad Ryerson, and thirteen year old Izac Mallicoat leading the field through much of the race.  Johnathon Logue then appeared on the scene,  flying on the topside. With a handful of laps remaining Logue was challenging both Mallicoat and Ryerson.  A yellow flag restart at lap sixteen would be just what Logue was looking for.  He made his move in turn two just after the race returned to green, taking over the top spot and keeping it to the checkers.  Ryerson finished as the runner up, Mallicoat was third, Cam Reimers was fourth, and Dusty Lynch finished fifth.  Logue, who started tenth on the grid, won for the fourth time this season.

There were two 12 lap dashes for the Northern SportMods.  The top 12 finishers from the heat races ran the Elmquist Towing Dash with $400 going to the winner.  Johnathon Logue cashed in there.  The Walters Sanitary Service Trash Dash was for the 12 drivers finishing fourth through sixth in their heats.  Garrett Nelson took home the $300 prize in this one.

The twenty lap IMCA Modified feature was decided by inches in a mad dash to the finish line that had the crowd on its feet.  Three drivers provided most of the action upfront for much of the race as Joel Bushore….in a new ride after his roll over accident last week, led the field as the race went green.  Dylan Thornton was quick to join in and then fourteenth place starter Jimmy Gustin joined in to make it a trio of fun.  The closing laps saw the three drivers go at it in a spectacular dash to the finish line.  Dylan Thornton had just enough momentum coming out of the final corner as the checkers unfurled, taking the win by inches over Jimmy Gustin.  Bushore finished a close third.  Cory Sauerman came from tenth to finish fourth, and Todd Shute finished fifth after starting in eleventh.  Thornton, who is from California, is spending the summer back here in Iowa, and ironically enough, staying with second place finisher Jimmy Gustin.  The win marked the first time Thornton has visited the winner’s circle at the speedway.

Donavon Smith was back in victory lane after winning the IMCA Stock Car twenty lapper.  Smith came from twelfth starting spot, caught and passed then leader Shane Stoneburner with just two laps remaining, and kept it the rest of the way to the finish.  Brother David Smith came from eleventh to finish as the runner up, and Stoneburner was third.  Kyle Everts and fourteenth place starter Jay Schmidt, completed the top five.  Smith repeated his win from last week, and grabbed his fourth win of the season.

David Rieks won for the first time this year when he took the fifteen lap IMCA Hobby Stock feature, leading all laps on his way to victory.  He held off twelfth place starter Dylan Nelson who took the runner up position.  Brayden Richards, Curt Reed, and Seth Butler would complete the top five.

Racing continues next week at the Boone Speedway when the green flag will drop at 7 p.m. 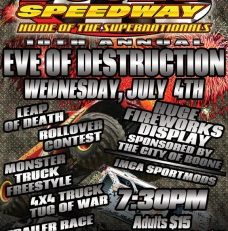 Little League Night is a Hit!

Kids of all ages had a great time on Saturday, June 12, 2010, for Little League Night at Boone... read more