The IMCA Deery Brothers Summer Series Late Models came to town for their annual Memorial Day visit to the Boone Speedway.  They were joined by the IMCA Stock Cars, IMCA SportMods, IMCA Hobby Stocks and the MADCRA Dwarf cars.   Fans saw an exciting, action packed program in all divisions.

lap feature.  Four provisional starters would tag the field–Mike Garland, Matt Strassheim, Nate Beuseling and Sam Halstead. The top twelve qualifiers from the heat races, drew in front of the grandstand for their starting positions.

Andy Eckrich jumped to the lead immediately and pulled away from the pack.  Tom Darbyshire had made his way into the runner-up 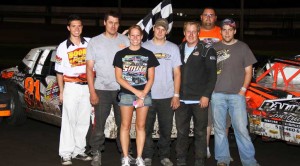 The Smith Brothers went 3 for 3 for the Memorial Day Special at Boone Speedway on Monday, May 30, 2011.

spot by lap thirteen and Ray Guss, Jr. had advanced from starting tenth, to take over the third spot.  Eckrich, meanwhile, was driving away while second and third places put the heat on each other.  Guss made the pass into second, and was reeling Eckrich in a bit, but time ran out for any real challenge.  Eckrich took the win in a smooth, and near-flawless performance, Guss had to be content for second place.  Darbyshire finished in third, Jeff Aikey took fourth and Terry Neal was fifth.

The Dwarf/Mod Lites ran an 18-lap feature.  Charlie Brown and Josh May had a tight battle going early on,  until May grabbed the lead and then pulled away.  Colby Oberembt also made the pass on Brown to get into the runner-up spot with Tim Hennigar hanging close on their heels.  Josh May took the win, and Oberembt trailed a distance for second.  Charlie Brown hung on for a third place finish over Tim Hennigar in fourth, and James May rounded out the top five.

Thirty-nine IMCA Northern SportMods checked through the gates.  It took two b-mains to whittle their starting field to 24-cars.   Doug Smith, Lake City, Iowa driver took the lead with a handful of laps to go after getting around Brian Miller.  Smith would then pull away and take the checkers for the win.  Brian Miller  finished second with Andy Tiernan and Scott Davis finishing closely to take third and fourth, in that order.  Mike Pruitt rounded out the top five.

The stock car feature was as exciting as it comes.  There was four-wide racing down the frontstretch and five-wide going into the corner.  Then it was all eyes on the top two cars, Wayne Gifford and Donavon Smith as they exchanged the lead several times from lap six through final lap 20.  Smith took command of the final lap to take the win and make it a three-for-three night for the Smith brothers as brother Devin had earlier won the hobby stock feature and brother Doug, the Sportmod feature.  Wayne Gifford had given it his all, but had to settle for second place, Alan VanGorp finished third, fourth went to David Smith (another Smith brother) and fifth to Jay Schmidt.

Racing will continue back at the Boone Speedway on Saturday night, June 4th when it will be regular racing in all divisions on Pepsi Cola & Soccer Night at the track.  Make plans to attend.

Click HERE for photos from the Memorial Day Special on Monday, May 30, 2011.

July 2, 2016 Boone Speedway saw a nice crowd on hand for their weekly show on Saturday night.  A good... read more 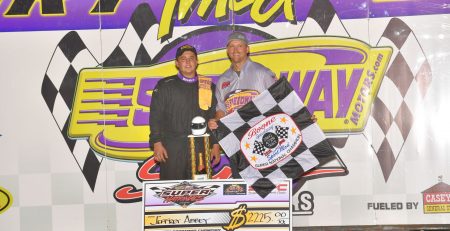 BOONE, Iowa (Sept. 5) – He’s already won a lot of races in his brief career but none bigger... read more

BOONE, Iowa – An expanded field and a tweaking of the voting process will give race fans a louder... read more