The Iowa State cheerleading squad brought a little extra to the Boone Speedway on Saturday night.  The youngsters enjoyed standing before the large crowd on hand, side-by-side with the cheerleaders and performing the cheers along with them.  In the racing action, a new winner went to victory lane in the IMCA Modified and Hobby Stock divisions, while the other three classes returned previous winners.

The Mod Lite 15-lap feature was led early by Randy Bryan.  However, lap traffic would then allow Andy Hennigar to grab the lead, with Bryan trying to make up for lost time.  A caution flag flew late, setting up a green-white-checkered finish but the two positions would remain the same to the checkers.  Hennigar took the win, his first since opening night, and Bryan had to settle for the runner-up spot.  Point leader Josh May came from starting twelfth to take third, fourth was Colby Oberembt and Troy Hudson was fifth.

The IMCA Northern SportMod feature played out next.  Last week’s winner, Brian Eppert led the first few laps until Jeremy Embrey came calling.  Embrey, who had started in row six, took the lead on lap eight and then walked away.  Embrey took the win, his second at the track this year and Eppert held on to second.  Third was Lynn Brockett, Lucas Lundry was fourth and fifth was Eric Elliott.

The action was fast and furious in the 20-lap IMCA Modified feature.  Mark Elliott shot to the lead from his pole starting position with Kelly Lyons in 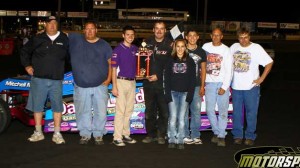 Mark Elliott motored his IMCA Modified to victory lane at Boone Speedway for the first time this season on Saturday, August 27, 2011.

hot pursuit.  By the halfway mark, Jimmy Gustin had snatched second place from Lyons, and then began applying the pressure to the leader.  Meanwhile, Jake Durbin had also advanced, getting into third and was up for the battle with Gustin.  At the checkers, Elliott took the win, his first of the year, and Durbin slipped under Gustin as they finished second and third respectively.  Lyons finished in fourth and Adam Larson came from starting twelfth, to finish fifth.

The IMCA Stock Car feature saw the two front runners, Rod Richards and Eric Brown get together, eliminating them both from the competition in the early laps.  Trent Murphy then inherited the lead, never to look back.  Murphy took the win, his third at the Boone Speedway in 2011.  Wayne Gifford followed Murphy to take second, point leader Donavon Smith finished third and Randy Killen and Jerry Gifford finished fourth and fifth in that order.

The first of two 12-lap IMCA Hobby Stock features saw a first time winner.  Scott Pippert got to the front early and cruised to the win.  Veteran driver, Randy Embrey finished in second, followed by point leader Michael Murphy in third, Dean Hartwig in fourth and Matt Hudspeth in fifth.

Next Saturday night, September 3rd, will be Season Championships, completing the regular season for 2011 at the track.  Then on Monday, September 5 will be the first of six-straight days of racing when the IMCA Speedway Motors Super Nationals comes to town.

Dale Hackwell Jr. will start from the pole when he takes the green for career eighth Deery Brothers Summer... read more

September 13,2011 The final race of the regular season at the Boone Speedway scheduled on September 3, 2011, did not... read more

July 28, 2018 Racing continued on Saturday night at Iowa's Action Track, the Boone Speedway.  It was also bike give... read more