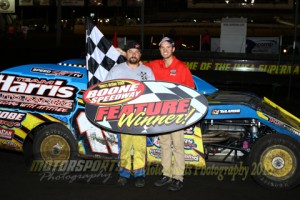 Saturday night, the Boone Speedway closed the books on the 2015 weekly season of racing.  Five track champions were crowned as well as five feature winners.  Each division of cars was brought to the front stretch for introductions before their feature was run, allowing the fans to salute the drivers.

The Mod Lite feature as well as the title of track champion, went to Josh May.  May led all flag-to-flag 18-laps on his way to the checkers.  Bryan Zehm finished in second place,  Travis Stensland started tenth and finished in third, Cory Dennis came from thirteenth starting spot to finish fourth and Cory Sauerman rounded out the top five.  May topped off his championship title with his fifth win of the season.

Eric Stanton also topped off his track championship title by winning the 15-lap IMCA Hobby Stock A main.  Stanton led the entire caution free race.  Aaron Rudolph was the runner up, Dustin Graham was third, Andrew Burg finished fourth and John Watson was fifth.  Stanton also won for the fifth time at the Speedway in 2015.

Point leader Jake McBirnie appeared to be on his way to capping his night off with a win in the 20-lap IMCA Northern SportMod feature.  McBirnie lost that lead with two laps left when Jonathan Logue slipped under him to take over the number one spot, keeping it to the checkers and the win.  Following second place McBirnie was Doug Smith in third, fourth was Randy Roberts and Sam Wieben was fifth.  This was Logue’s fifth win of the season in another caution free race.  McBirnie is the 2015 track champion in the SportMod class.

Donovan Smith won the IMCA Stock Car 20-lap feature.  He passed pole sitter and point leader Jay Schmidt just past the half way mark, keeping it to the finish and his second win at Boone this year.  A green-white-checkered finish worked to the advantage of Rod Richards and Wayne Gifford, both getting around Schmidt as they finished second through fourth in that order.  Rookie Tyler Pickett rounded out the top five.  Schmidt held on to his point lead, winning the track championship in the Stock Car class.

Jimmy Gustin took home the win and another track championship in the Modified division.  Gustin led

Jimmy Gustin won both the feature and the IMCA Modified track championship on Saturday, August 29, 2015, at Boone Speedway.

all 25-laps of the main event.  Scott Davis chased Gustin most of the race until Mike VanGenderen made the pass into second with a couple of laps remaining, VanGenderen finishing second, Davis, third.  Eric Elliott and tenth place starter Jon Snyder, were fourth and fifth respectively.  Gustin claimed his fourth consecutive track title.

Next Saturday night, September 5, is the “Prelude” to the Super Nationals.  It will be a draw-redraw night of racing and open to all drivers.  Hot laps are 6:45 and racing at 7:30.