Sean Johnson was the winner of a three-lap dash with Trent Murphy during the Thursday program at Boone Speedway and will start on the pole for the Stock Car main event.

The rest of the top five finishers from the Wednesday qualifiers drew for their starting spots in the fan zone following the dash.

Reserve fireman Will Brack of Mead, Colo., is piloting the IMCA Modified tribute car marking the 10-year anniversary of the 9/11 terrorist attacks and the firefighters who responded to the call to the World Trade Center.

The wrap was the brainchild of Jason Hastings at Overnight Wraps.

“It was an awesome idea. I told him to go with it,” said Brack, a firefighting academy graduate at Aims College in Greeley. He works two or three 24-hour shifts each month and also trains with the Fredrick Fire Department while hoping to make a career of the vocation.

“I always thought what firemen did was cool. It’s not all about putting out fires,” Brack said. “They’re always looking for ways to help people. That’s what I want to do.”

Oronogo, Mo., driver Jerry Hoffman is also in a tribute car, for the victims of the tornado that hit his hometown of Joplin in May, killing more than 150 people, as well as the countless volunteers who came to help clean up, comfort and console afterwards.

His wrap shows the devastated Joplin landscape and promotes the www.convoyofhope.org website, which raises fund to benefit the victims of Joplin and other natural and man-made disasters.

“We come to Boone to race at Super Nationals every year,” Hoffman said. “Hopefully this year we can also raise a little money for the people of Joplin.”

Ken Walker of Transport Graphics came up with the wrap.

Back to the subject of the Bracks; Younger brother Matt rolled multiple times off turn three in his Modified “B” feature on Thursday but ended roofside up.

“I was making my way through the field pretty good. I just went into the turn a little hard,” he said early Friday afternoon. “I’m not sore or anything and everything is OK with the car. The frame was OK. We were up until 5 a.m. making repairs but it was mostly bolt-on stuff.”

A dozen foursomes, two of which got zero sleep the night before, competed. Various prizes were also given by IMCA and local sponsors. 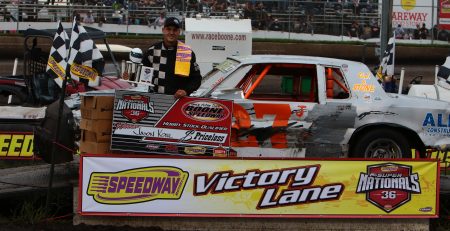