Guss started 15th, steered around trouble to take the lead at midway, then held off Jeff Aikey the last 25 times around the track for the $2,000 checkers.

Aikey had qualified from his “B” feature and restarted at the back of the field after a lap two trip to the work area. Last row starters Andy Eckrich and Tyler Bruening both moved up 20 spots to finish third and fourth, respectively. Ryan Giles rounded out the top five.

Pole starter Terry Neal looked like the car to beat, leading the first 18 laps before colliding with Boone McLaughlin while under yellow and exiting for the pits.

McLaughlin’s turn at the front lasted seven circuits. He got askew after getting too high in the middle of turns three and four, collecting the third running Josh Most in the process.

Guss ducked low to avoid becoming part of that collision, then kept Aikey in check over the course of five restarts that slowed the last half of the contest.

“After starting 15th, I wasn’t sure we’d be able to get to the front because there were just so many good cars here, but once we got to third everything just kind of worked out for us,” he said. “I knew Jeff had gone to the pits but when I looked up at the lap board and saw the 77 there I knew he was flying.”

Aikey, a two time Super Nationals champion, was into fifth by lap 20 and lined up behind Guss for the restart on lap 26. The race was stopped when Jason Rauen ended up on his roof on lap on lap 38.

“After the red flag, I knew I’d have to take the high line. I couldn’t let Jeff take it. It ended up being the fastest line for me,” Guss said. “This was a race we really wanted to win again. It means a lot to all of us.”

Four yellows came out before the first six laps were cored. Neal led McLaughlin, Neal and Most in checking out, as most of half a lap separated Most from Jill George in fifth.

The first female driver to qualify for a Super Nationals Late Model main event, George was briefly in fourth after Neal drove off before giving way to Kevin Sather and Aikey.

Eckrich took a provisional, started 23rd and ran third the last 22 laps, never quite able to keep pace with Guss and Aikey. Bruening, another of the nine drivers making their Super Nationals debut, also took a provisional and started 24th in the main event. He got past Giles on the last lap to get into the top four.

The win was the fifth of the year of Deery career 21st for Guss. He’ll look to cap off a season that also included the IMCA national, three track and Illinois state championships at the $10,000 to win series finale next weekend at 34 Raceway in West Burlington. 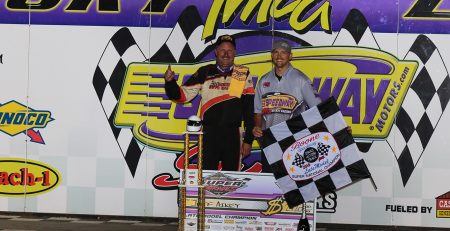 Another one for the record book: Aikey wins sixth Super Nationals crown

BOONE, Iowa (Sept. 8) – Even after 30-plus years in the sport, Jeff Aikey is still finding ways to... read more

Saturday’s race program at Boone Speedway began with the 911 tribute cars of Will Brack and Jeff Feaster displayed... read more