It was another Harris Auto Racing regular Saturday Series of racing at the Boone Speedway on Saturday night.  One hundred seventy race cars were on hand, providing the fans with a full night of exciting racing action.  The IMCA Modified feature came right down to the wire, with Jimmy Gustin taking home the victory.  Jay Schmidt captured the IMCA Stock Car feature, and it was Jake McBirnie going from last to first in the IMCA Northern SportMod main event.  Josh VanCannon scored his first career IMCA Hobby Stock checkers, and Terry Brown put his Mod Lite in the winner’s circle for the first time this season.  The two-person Cruisers closed out their run for the year, with the duo of Laura Boal and Camilla Hamilton going to victory lane.

Terry Brown got the monkey off of his back when he finally crossed under the checkers first in the Mod Lite division, getting his first win of the year.  Brown started fourth, and had the lead with a handful of laps in the books.  He then kept that top spot the rest of the way to the checkers and the win.  Mike Kennedy finished in the runner up position after starting eight on the grid.  Joe Glick was third, fourth went to Joel Huggins, and Randy Bryan was fifth.  Brown finally got back to the winner’s circle after wins had eluded him the past several years.

The Elmquist Towing IMCA Northern SportMod feature had the crowd on its feet when at the checkers, Jake McBirnie took the win.  McBirnie was involved in an incident on the backstretch just after the initial green flag flew, finding himself partially on top of another car, and the race under the red flag.  He was able to continue, but had to tag the field for the restart of the race.

Colton Nelson, the driver from Osceola, Iowa, held down the top spot as the race went green.  He held back some hard chargers in Johnathon Logue, Cody Thompson, and Colby Fett, and as the race wore down to its final laps, it was Jake McBirnie entering into the picture.  The final circuit of the race was three wide racing with Nelson, McBirnie, and Thompson coming to the checkers.  McBirnie’s momentum on the topside was just what he needed to send him across the finish line first and score the win. Colton Nelson had to settle for the runner up spot, Cody Thompson started twelfth and was third, Colby Fett came from tenth to finish fourth, and Muscatine, Iowa’s Shane Paris started sixteenth, and completed the top five.  McBirnie repeated his win from last week, and captured his seventh trip to the winner’s circle this year.

Earlier, the IMCA SportMods ran a Cash Dash for $500.  The top two finishers of the heats started three wide in the 12-lap shoot out.  Johnathon Logue took home the cash.

Not to be out done, the IMCA Snap-on Tools Modifieds had it come right down to the wire in their 20-lap feature finish.  Kyle Brown started on the outside front row, and grabbed the immediate lead.  Brown continued his run at the front of the field with a healthy lead until a yellow flew at lap eighteen.  This tightened up the field for the restart, just what second place runner Jimmy Gustin was wanting.  Brown held the lead at lap nineteen, but saw it vanish coming out of corner four looking at the checkers.  Gustin surged ahead and took the win, Brown having to settle for second place.  Joel Rust started thirteenth, and finished third, fourth went to Chris Mills, and pole sitter Ryan Jenkins from Omaha, Nebraska was fifth.  Gustin, who has the track points wrapped up, started eleventh and scored his fourth feature win of the year.

Jay Schmidt took the IMCA Arnold Motor Supply Stock Car win, setting his ride on the top of the track and moving from eighth starting spot and into the lead on lap eight.  He held it the rest of the way to the flying checkers and the win.  Donavon Smith finished a close runner up, Jeff Mueller started tenth and finished third, fourth went to Carroll, Iowa’s Joel Tigges, and Rod Richards rounded out the top five.   This was Schmidt’s second regular season win of the year, and he also won the Frostbuster special.

Josh VanCannon scored his first career win in the Pickett Salvage IMCA Hobby Stocks.  VanCannon started on the pole and led all fifteen laps on his way to victory.  Eric Knutson finished a distant second, Seth Butler was third, James Johnson from Cherokee, Iowa was fourth, and Matt McDonald was fifth.

Next Saturday night, August 24, is season championship night. Hot laps are 6:15 and racing at 7.

This will be the last week to order transponders to get the reduced track pricing.  Please email transponders@raceboone.com to... read more

Photos taped above a workbench in Jeremy Montgomery’s trailer document highlights of his rac­ing career. He’s hoping to add to that... read more 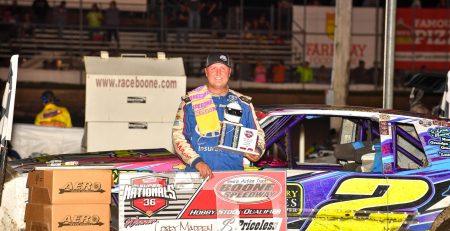