Forty-two My Race Pass Mod Lites were in town for one of their Corn Belt Nationals Series races.  Drivers from all over Iowa plus several states came to try their luck at Iowa’s Action Track.  A pair of  #11 cars led the field through much of the race with the #11P of Jon Padilla, Silvis, Illinois, holding off the #11 of long tow Zac Forster from Bakersfield, California.  As the 20-lap feature race was a lap from finished, two cars spun in front of the leaders, and though the green light never went off, it was apparent that leader Padilla was expecting a caution to fly, as he let off the throttle. Forster was quick to realize the green was still out, and flew around Padilla to take the win.  Padilla held on to take second, third went to Josh May, Joel Huggins was fourth and last week’s winner Mike Kennedy rounded out the top five.

A huge field of sixty-five IMCA Northern SportMods were on hand for a night of racing.  Dylan VanWyk, the youngster from Oskaloosa, Iowa led the way in the 18 lap feature event from the drop of the green flag and was looking strong as he held back the thundering herd behind him.  Among those drivers charging hard were Johnathon Logue, Doug Smith, and from deep in the pack, Brayton Carter.  It then became a pack of those four cars getting locked into a tight battle, with Doug Smith getting the upper hand at lap twelve.  He never relinquished that lead, sailing home under the flying checkers to score the victory.  It was a fight to the finish for position behind him, with Brayton Carter taking the runner up position after starting twenty-third.  Dylan VanWyk was third, Johnathon Logue fourth, just holding off Hunter Longnecker in fifth.

Thirty-nine IMCA Modifieds were in competition and it was appearing that hometown driver Russell Dickerson was going to top them all as he immediately powered to the lead from his fourth place starting spot.  Dickerson was still leading the 20-lap feature event as the laps wound down but Brainerd, Minnesota driver, Aaron Johnson, who had started ninth on the grid, had reeled him in and was challenging.  Dickerson held the upper hand at lap nineteen, but was unable to hold off his nemesis that final lap with Johnson making the pass and snatching the win.  Dickerson had to settle for second.  Kyle Brown moved up from eleventh starting position, to finish third, fourth was Trent Loverude, New Ulm, Minnesota, and Chase Rudolph completed the top five.

Forty-seven of the Class too Tough to Tame, the IMCA Stock Cars entered the pits.  This one would be led from start to finish the entire 18-laps by Lake City’s Devin Smith.  He finished comfortably ahead of brother Donavon Smith who had started seventh on the field.  Jay Schmidt finished third, Scott Davis, defending track champion in the division, was fourth, and another of the Smith brothers, David Smith, finished fifth.

The night cap finale was the the 15-lap IMCA Hobby Stock feature.  Dylan Nelson, defending Super National’s champion of the class, took full advantage of his pole starting spot, leading the entire race to take the win.  Seth Butler challenged Nelson in the final two laps but had to be content with the runner up spot.  Solomon Bennett was a hard charger, coming from thirteenth starting position to finish third, as was fourth place finisher Jimmy Johnson who started twenty-second.  Zac Smith rounded out the top five.

It was another night of empty grandstands as all eagerly await word that spectators will be allowed.  Until then, tune in to IMCA TV for coverage weekly. 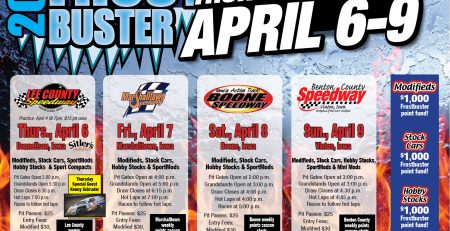 Bring the family for a night of fun at Boone Speedway on Saturday, August 10th! Kids will be busy designing... read more