BOONE, Iowa (Sept. 5) – A regular in the main event at the IMCA Speedway Motors Super Nation­als fueled by Casey’s will make his career seventh Saturday night start from the front of the out­side row.

Jason Kohl raced from eighth starting to the lead on just the sixth of 25 laps in winning the qualify­ing feature postponed from Tuesday. He dueled with Eric Stanton, who exited with a flat tire, before winning in front of Brandon Cox.

Irvine is now a six-time main event qualifier. Overton and Pesicka both made it in the fourth time, Cox, Olmstead, Gillette and Burkhart each the first.

Kids ages 12 and under are encouraged to join the Boone Speedway Racing Rascals Club! Rascal members are invited to... read more 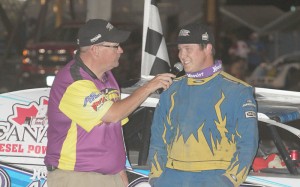 Scholpp beats the odds and returns to racing

BOONE, Iowa – Fifty-odd phone call calls and 20 or so texts followed Kody Scholpp’s run to the checkers in... read more

August 3, 2013 The fans were treated to great weather, and great racing on Saturday night at the Boone Speedway.... read more