It was a full house at the Boone Speedway on Saturday night, both in the stands and in the pits.  The grandstands were full of fans eager for the 152 cars to put on a show, and that they did.  The track just keeps adding to the list of first time winners this year, putting the twelfth different driver in the Modified category and the eleventh in the Hobby Stock division.

The Mod Lite feature found a familiar face back in victory lane.  Joe Glick led from the drop of the green until lap ten.  That’s when Terry Brown passed Glick for the top spot, and held it to the checkers.  Glick held on to the runner up spot, third was Bryan Zehm, who started eleventh on the grid, fourth went to Joel Keenan, and point leader James May was fifth.  Brown, who started ninth, made this his fifth victory at Boone this season.

The 24-car starting field for the 18-lap Northern SportMod feature had to be completed by a B main.  That was won by Johnathon Logue, Jr.  Shawn Albers led the field in the A main until the halfway mark.  That’s when Ben Kates snatched it away.  Kates worked his way into the lead from starting eleventh but then had to contend with rookie Jake McBirnie.  McBirnie pestered Kates the remaining way to the finish, looking to the outside, but to no avail.  Kates took the win, McBirnie having to be content with the runner up spot.  Third was Shawn Albers, Lynn Brockett was fourth and Tim Love completed the top five.  This was the sixth win for Kates this year.

The Hobby Stock class ran two B mains in order to complete their 24-car A main.  Those wins went to Jacob Keiser from Marengo, and Justin Nehring from Storm Lake.  The feature didn’t begin well when Bryan Keeney ran head on into the cement wall in turn two before the first lap was scored.  He was not hurt.  When things did get underway, 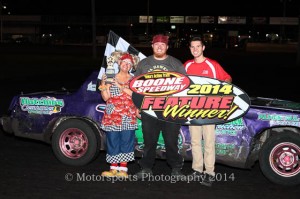 Seth Janssen kept the lead to the flying checkers and secured his first career feature win in his IMCA Hobby Stock on Saturday, August 9, 2014, at Boone Speedway.

Seth Janssen took command at lap one but soon had the company of Cody Gustoff hounding him.  Janssen and Gustoff raced side-by-side for many laps, Gustoff trying to make the low side stick, but was unable to pull it off.  Janssen kept the lead to the flying checkers and secured his first career feature win.  Gustoff took the runner up spot, Tyler Pickett came from starting eleventh to finish third, Eric Stanton started twelfth and was scored in fourth and John Watson, point leader, worked his way from sixteenth starting spot, into a top five finish.  The race went the full twelve laps, caution free.

The Modified 20-lap A main’s starting lineup was also completed by the running of a B main.  Jimmy Gustin took that win.  The feature was pretty much a three-car battle for much of the distance.  Tyler Prochaska established the lead at lap one, and Joel Bushore and Kyle Krampe tucked in right behind.  The lead swapped back and forth, each of the three leading briefly during the battle.  Krampe finally got to the front at lap nine and was able to hang on for the win.  Second went to Prochaska, Scott Davis made a late race charge to finish third, as did Russ Dickerson in fourth, and Bushore fell back a bit in the closing moments, and finished fifth.  This was Krampe’s first ever career win in the Modified class.

The IMCA Stock Cars also had to have a B main.  Don Vis took that win.  The early portion of the 18-lap A main was led by Scott Bailey, but when a yellow flew at lap three, eighth place starter Trent Murphy was already up to second place.  Eric Brown was aligned in third for the restart, and Jay Schmidt had worked his way from tenth starting spot, up to fourth.  Just two laps after that restart, Schmidt took over the top spot, and Murphy took over second.  The rest of the way to the checkers was a battle between Schmidt and Murphy.  Murphy was digging on the bottom, Schmidt staying high, when just after lap fifteen was scored, Murphy saw his chance and slipped under Schmidt and into the the lead.  As the white flag was showing, Murphy pulled up in front of Schmidt, contact was made and then Murphy slowed with an apparent tire going down.  Schmidt grabbed the lead, and motored home to the checkers and the win.  Robert Stofer, who had been running third, took second place, third was Donavon Smith, last week’s winner, fourth went to Jerry Gifford and Murphy fell back to finish fifth.  This was Schmidt’s fourth win at Boone in 2014.

Just three weekly races remain until the season draws to a close.  Next Saturday, August 16 will be Boone Fire Department Night with racing in all five divisions.  Hot laps are 6:45 and racing at 7:30.

Due to the unseasonably cold and rainy weather we will not be racing tomorrow night.  See you next week. read more

BOONE, Iowa – One-way radios will be mandatory for all drivers in all divisions competing at the Sept. 2-7... read more