It was Saturday night series #15 at the Boone Speedway with 175 cars checked in for another full night of racing action.  Cody Laney got his first win of the year under his belt in the IMCA Modified class, Troy Jerovetz won a squeaker at the line in the IMCA Stock Cars, and Chad Ryerson won a close one in the IMCA Northern SportMod division.  It was Dylan Nelson making a return visit to the winner’s circle in the IMCA Hobby Stocks, and Travis Stensland did the same in the MADCRA Mod Lites.

Travis Stensland shot from fifth starting spot in the My Race Pass Mod Lite 15 lap feature, and into the lead at lap two, never to look back.  Bryan Zehm reeled in the leader but had to be content to chase him across the finish line as the runner up.   Mike Kennedy came from eleventh starting position and finished third, Cody Yaw and Joe Glick completed the top five.  This was Stensland’s third time visiting the winner’s circle in 2020.

There was a great battle between Chad Ryerson and Jake Sachau for much of the 18 lap IMCA Elmquist Towing Northern SportMod main event.  The two swapped the lead and ran side by side for several laps. Ryerson finally took the top spot for good with just one lap remaining, making it to the checkers just ahead of second place Sachau.  Dusty Lynch finished third, Brayton Carter started twelfth on the grid, and finished fourth, and Dusty Masolini was fifth.  This was Ryerson’s second win at the speedway this season.

Leading the last lap is the one that counts, and in the IMCA Modified D & E Outside Service 20 lap A main, that is just what Cody Laney did.  Chase Rudolf led the field from the drop of the green and was looking for his first win at Boone.  However, a late yellow flag at lap seventeen proved to be his nemesis.  Laney saw his opportunity as the race returned to green, and passed second place Nick Meyer, and then Rudolph on the final lap, and was able to take the checkers first.  Rudolf had to settle for the runner up position.  Nick Meyer started tenth, and finished third, Tim Ward made it to fourth after starting eleventh, and Clint Wendel was fifth.  Laney came from twelfth starting spot to take his first win at the track in 2020.

It couldn’t have been a closer finish than in the IMCA Arnold Motor Supply Stock Car 20 lap feature.  Troy Jerovetz worked his way quickly from sixth starting spot and into the lead with just three laps down.  Quick to tag on to his tail was David Smith and then Damon Murty came flying on the rim of the track and caught the leaders.  The three locked into a tight battle until Murty found himself out of the running. His last lap “checkers or wreckers” rim of the track move in turn one, sent him over the edge and out contention. The final charge to the checkers between Jerovetz and David Smith had the fans on their feet as the two passed the finish line in a near photo finish.  Jerovetz got the win via transponder scoring, with Smith just inches behind in second.  Devin Smith crossed the finish line in third, Donavon Smith in fourth, and Jay Schmidt in fifth.  However, a post race inspection deemed third place finisher Devin Smith with an illegal carburetor, and a disqualification.  This moved Donavon Smith to third, Jay Schmidt to fourth, and Kyle Everts to fifth.  Jerovetz captured his fourth feature win of the year.

Fifteen laps of IMCA Pickett Salvage Hobby Stock racing concluded the night’s racing.  Pole sitter Tyson Overton immediately took the lead as the green flag flew, and was looking to be on his way to his first win at the track, leading the troops through lap nine.  Meanwhile, Dylan Nelson had worked his way from eleventh starting spot, and was reeling in the leader.  A slight “wag of the tail” by Tyson as he exited turn two was all that Nelson needed as he then slipped past and into the lead with a handful of laps remaining.   Nelson kept a tight hold on that top spot the rest of the way to the checkers and the win.  Overton took the runner up spot, Erick Knutsen came from tenth to finish third, Solomon Bennett was fourth, and Curt Reed rounded out the top five.

Next Saturday night, August 29, is season championship night.  Hot laps 6, and racing at 7. 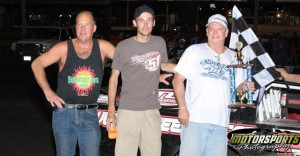 June 30, 2012 After last week's rain out, the Boone Speedway sprung back to life with hot racing action to go along with... read more