Logue logs back to back Modified victories 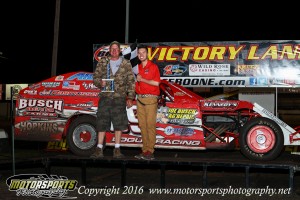 Logue logs back to back Modified victories

Weekly action continued at the Boone Speedway on Saturday night, under a constantly changing sky.  John Logue put his ride back in victory lane in the IMCA Modified feature for the second time in a row, Jay Schmidt scored a repeat victory in the IMCA Stock Car ranks, and Chad Ryerson in the IMCA Northern SportMod division, David Rieks in the IMCA Hobby Stocks, and Travis Stensland in the Mod Lite class, all won for the first time in 2016.

Five time Super Nationals winner, John Logue, started seventh and had his familiar #69 in the lead by lap eight of the 20-lap IMCA Modified feature.  He never relinquished that lead on his way to the checkers and the win.  He had big time

company behind him fighting it out tooth and nail for position.  It was Jimmy Gustin, eleventh place starter, winning the battle to take the runner up spot.  Point leader Mike VanGenderen finished third from his twelfth place starting spot.  Russ Dickerson came from eighteenth, to finish fourth, and Kyle Brown rounded out the top five.  Logue repeated his win from last week.

Jay Schmidt captured his second win of the season in the IMCA Stock Car class.  He wasted no time in getting to the front, grabbing the lead by lap two from his sixth starting spot.  He stretched his lead, looking comfortable out front, until a caution at lap fifteen of the 18-lap race bunched the field.  It was Donavon Smith then close at hand in second for the restart.  However, Schmidt kept his poise and the lead the rest of the way to the checkers.  Smith held the runner up spot over Matt West in third, Tyler Pickett in fourth and Wayne Gifford in fifth.

Weekly racing continues next Saturday night, June 11 with racing in all five divisions.  Hot laps are 6:45 and racing at 7:30.

Four in a row for Thornton

May 19, 2018 Mother Nature did not win this one from Boone Speedway on Saturday night.  The earlier rain did... read more