The IMCA Super Nationals are in sight, and the drivers are already prepping for the 38th annual event.  Two hundred twenty-eight cars packed the pits on a night that included an IMCA Sport Compact shakedown along with all of the regular classes.

Jake McBirnie would earn his first win in an IMCA Modified, Donavon Smith made it three in a row in the IMCA Stock Cars, and Johnathon Logue repeated his win from last week in the IMCA Northern SportMod class.  Mike Smith took the checkers in the IMCA Hobby Stock division, and Jake Benischek got geared up for next month’s Super Nationals by winning in the IMCA Sport Compacts.  Cody Yaw was a happy camper when he got his first career win under his belt in the Mod Lites.

Cody Yaw was the happy recipient of the trophy and a visit to victory lane in the My Race Pass Mod Lites. Yaw led the early portion of the race only to be passed by Jon Braathun and Mike Kennedy as the race came down to the final lap.  However, a tangle and subsequent penalty to both drivers as the race ended, handed the win over to third place running Yaw.  Bryan Zehm was awarded the runner up spot, coming from fourteenth starting spot, Randy Bryan, Ben George, and Tanner Gannon completed the top five.  This was Yaw’s first career win.

Johnathon Logue found the winner’s circle again in the Elmquist Towing IMCA Northern SportMods.   He put his ride to the lead on lap seven, and then never looked back.  Dusty Lynch chased the winner across the line to finish as the runner up.  Colt Nelson took third, Tyler Titus was fourth, and Hunter Longnecker was fifth.  Hard charger was Adam Birck, Canton, Missouri who started twentieth, and finished sixth.  Logue matched his win from last week, and took his fifth win of the season.

The Mach-1 IMCA Sport Compacts were in town for their shakedown to the upcoming Super Nationals.  Mitchell Bunch and Jake Benischek put on a good battle as they fought for the lead.  Benischek finally claimed it as his own, and went home to the flying checkers in the fifteen lap contest.  Bunch would trail the leader across the line to finish second.  Kaytee Devries made the trip down from Spencer, Iowa, started twelfth and took third place.  Hunter Patrick, St. Charles, Iowa, and Curtis Masterson, New Virginia, Iowa rounded out the top five.  Benischek, who lives in Durant, Iowa in far eastern Iowa, made the trip worthwhile by taking the checkers.

Jake McBirnie grabbed the lead from Joel Bushore with a handful of laps in the books in the 20 lap main event for the D & E Outside Services IMCA Modifieds.  Just a lap later, it was twelfth place starter Joel Rust who was challenging him for the lead.  The two would swap the top spot back and forth for several laps until Rust was suddenly pulling into the infield with issues. McBirnie then pulled away from the field, and took the win well ahead of second place Nick Meyer.  Bushore took third place, fourth went to thirteenth place starter Tim Ward,  and Cory Sauerman was fifth.  This was McBirnie’s first ever win in the Modified class after jumping up from the Northern SportMod division.

Jesse Smith led the field in the early going of the Arnold Motor Supply IMCA Stock Car 20 lap contest.  However, it was another Smith,….Donavon Smith, that would be standing in victory lane at the end.  Donavon, who started twelfth, had the lead on lap nine, pulled away in the closing laps to take his third win in a row, and his fifth at the track this year.  Kyle Everts finished as the runner up, Jeff Mueller was third, Troy Jerovetz took fourth place, and Tyler Pickett was fifth.

The Pickett Salvage IMCA Hobby Stocks ran their 15 lap feature next with Mike Smith paying a return visit to the winner’s circle and a shiny new trophy as he begins his collection.  Smith would finish comfortably ahead of runner up Curt Reed.  Solomon Bennett took third, Eric Knutson started tenth and finished fourth, and Seth Janssen was fifth. 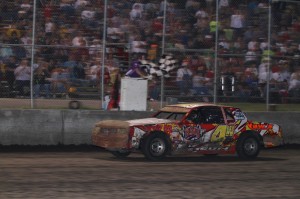 DES MOINES, Iowa – From the drop of the first green flag this season, John Watson put himself into... read more