The pleasant weather brought a great crowd out for the racing action on Saturday night. An added bonus for the night included a Stock Car King of the Hill race with the winner receiving $500.  The Modifieds, SportMods, Hobby Stocks and Mod Lites all had winners repeat previous victories, while the Stock Car class found a new face in victory lane.

The Mod Lites kicked off the night’s feature racing with their 15-lap A main. David Schmalzried led the entire race except for the final few feet to the checkers when Ed Zehm snatched the win away. Josh May finished in third, fourth was Bryan Zehm and Jason Whitehead finished fifth. This was Zehm’s second feature win at the track this season.  The race went caution free.

The IMCA SportMod feature found Eric Elliot win for the second week in a row.  Elliott started in row six, worked his way through the pack and took the lead by halfway of the 18-lap contest. Scott Davis waged a challenge at the finish but had to settle for second. Third went to Rick Ringgenberg, fourth was early leader Jerry Hinton and fifth went to Darren Huntley.

It was an exciting 20-laps in the IMCA Modifieds with cars battling for the top positions. Kelly Lyons led the 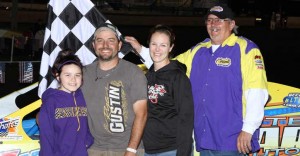 Jimmy Gustin passed for the lead on lap 11 and took home the checkers in the IMCA Modified division at Boone Speedway on Saturday, June 2, 2012.

charge in the first half of the race, Todd Shute, Jimmy Gustin, Josh Gilman, and Mike VanGenderen in tow. Gustin was able to make the pass for the lead by lap eleven and pulled away from his contenders, claiming the win, his second of the year.  Todd Shute and Mike VanGenderen finished second and third, well ahead of fourth place Denny Rosenberg and fifth place Kelly Lyons.

The IMCA Stock Cars had a King of the Hill contest earlier, pitting the top two finishers from the heats. After elimination rounds, the final two remaining were Wayne Gifford and Cory Bushnell. Gifford was crowned king, taking home the $500 bonus.

In the IMCA Stock Car feature, Cory Bushnell redeemed himself from his earlier defeat in the King of the Hill event and led the 18-lapper, flag to flag, taking the victory, his first of the year.  Jerry Gifford tailed Bushnell most of the race, unable to catch him, and finished second.  Jay Schmidt was a close third, followed by Donoavon Smith in fourth and Michael Murphy rounded out the top five.

The 12-lap IMCA Hobby Stock A main saw a very familiar driver take the checkers once again.  John Watson, as point leader in the division, started in twelveth spot, and was leading on lap four.  It was no contest after that, as Watson lengthened his lead and won his sixth points race feature of the year.  Aaron Rudolph finished a distant second, followed by Matt McDonald in third, Austin Luellen in fourth and Curt Reed in fifth.

Next Saturday night, June 9th will be Soccer Night and ages 18 and under will be admitted free.  Hot laps are 6:45 and racing at 7:30.

August 29, 2020 It was Season Championship night at the Boone Speedway Saturday.  Five drivers won features in their divisions... read more 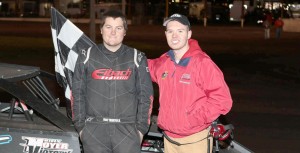 The Boone Speedway's annual Frostbuster special is finally in the books, after being postponed one week.  Saturday's race was... read more

Remember that vintage hearse pulling a casket down the front stretch? And just how much hang time did that slick... read more