It was a Super Saturday at the Boone Speedway for sure as there was a lot going on.  Super Saturday found the IMCA Modifieds going for $1,000 to win their feature. They were also vying for a chance at the TiLUBE Challenge paying another $1,000 to the winner, and a second chance race paid $500.  The IMCA Northern SportMods had a chance at $750 for a lucky draw finishing position, and the IMCA Stock Cars were sponsored for a $400 pay day.  As an added attraction, the Karl Chevrolet Dirt Trucks were also in town.  To top it off, all heat winners were awarded a watermelon, on Watermelon Classic night that saw 160 cars pack the pits!

Feature racing started with the My Race Pass Mod Lite 15-lap A main.  This one saw Bryan Zehm lead the entire distance to capture the win.  Joel Huggins claimed the runner up position, third went to Randy Bryan, Mike Kennedy came from the tenth starting spot to finish fourth, and Terry Brown was fifth.  This was Zehm’s third win at the track this season.

The Elmquist Towing IMCA Northern SportMods came next for their 18-lap feature.  Cory Pestotnik claimed the early lead but had it wrestled away by Johnathon Logue on lap thirteen.  Logue held off the competition the rest of the way to the checkers and claimed the win.  Cory Pestotnik finished second, followed by Jake McBirnie in third, Dusty Masolini in fourth, and Dustin Lynch rounded out the top five.  Logue claimed his second feature win of the season.  Dusty Masolini was the lucky recipient of the $750 mystery position.

The Karl Chevrolet Dirt Trucks made their second appearance of the year.  They ran a 20-lap A main that saw Myles Michehl lead from the drop of the green to the checkered flag.  Bill Davis, Jr. closed in on the leader but could do no better than finish second.  Jeff Frevert, Shawn Mapes, and Lou Sipolt completed the top five.

The IMCA Arnold Motor Supply Stock Cars saw Brandon Pruitt take advantage of his outside front row starting position, grabbing the lead immediately.  Pruitt held off some heavy competition, maintaining that top spot all the way to the flying checkers.  David Smith started sixth, and chased the leader the entire race, but had to be content with the runner up spot.  Third went to seventh place starter Jeff Mueller, longtime racer Robert Stofer was fourth, and Bryan Snell drove his hot rod from twelfth starting spot, to finish fifth.

The Pickett Salvage IMCA Hobby Stocks ran 15-laps and found Shaun Wirtz standing in victory lane at the conclusion.  Wirtz caught early leader Bryant Johnson by setting sail on the top of the track, taking over the number one spot with five laps down.  The race was red flagged on lap thirteen when rookie driver Braden Richards took a scary ride, ending up in the catch fence just past the flagstand.  He was okay.  When the race resumed, Wirtz was able to maintain his lead the final circuits to take the flying checkers and the win.  Bryant Johnson held second place, third was James Johnson, and Eric Knutson held off Matt McDonald as they went fourth and fifth respectively.  Wirtz bounced back after rolling his car last Saturday night, and claimed his second trip to the winner’s circle this year.

The Snap-on Tools IMCA Modifieds took center stage with three main events on tap.  They ran their usual 20-lap feature which paid $1,000 on Super Saturday.  Cody Laney, Torrance, California driver who likes to spend time back in our neck of the woods during the summer, would collect the money in this feature, leading all laps and winning going away. Another Californian, Ethan Dotson takes a liking to Iowa in the summer as well, and drove his ride from sixth starting spot to finish second.  Thor Anderson ran at the front of the field all race, and finished third, fourth went to Randy Havlik, and Jeff Aikey finished fifth.  This marked Laney’s first win at the track for 2019.

Earlier, all Modified drivers ran time trials, with the top twelve qualifying for the TiLUBE $1,000 to win feature.  The next twelve in times went to a 2nd Chance Showdown.  The 2nd Chance race was 15-laps and went to Richie Gustin.  Gustin overtook early leader Cory Wray and never relinquished the lead on his way to the $500 check.  Wray held the runner up spot, Kelly Shryock, Cody Bauman, and Tony Cox completed the top five.

It was a 3-wide start for the 15-lap TiLUBE Challenge. Ricky Thornton, Jr. took command on lap three, and never gave it up. Tim Ward came from fifth, to finish as the runner up, Cody Laney started on the pole and finished third, Thor Anderson started tenth, and finished fourth, and Jon Snyder took fifth, from starting eleventh.  Thornton took the $1,000 and an impressive trophy for the showcase. 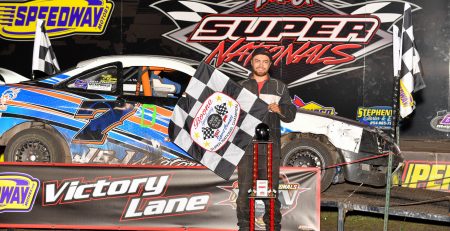 BOONE, Iowa (Sept. 5) – After failing to qualify for the main event in his first IMCA Speedway Motors... read more