The Prelude to the Super Nationals at the Boone Speedway began on its scheduled Saturday night September 1, but due to Mother Nature, it did not end until Sunday afternoon, September 2.

Drivers from all across the country, plus Canada and Australia were among the 285 cars in the IMCA Modified, IMCA Stock Car, IMCA Northern SportMod, and IMCA Hobby Stock classes testing the track for the upcoming 36th running of the IMCA Super Nationals beginning on Labor Day.

The IMCA Northern SportMod class ran their 25-lap A feature first, and it was no stranger back in Victory Lane.  Hometown boy Jake McBirnie started seventh and was in command at lap six, never to look back.  Lucas Lamberies from Clintonville, Wisconsin chased McBirnie for much of the race, but could do no better than finish a distant runner up.  Johnathon Logue started twelfth, and finished third, just getting by fourth place finisher Cody Thompson, and Overton, Nebraska’s Jacob Olmstead drove his hot rod from sixteenth starting spot, to finish fifth.

McBirnie had previously won six features at the Boone Speedway in 2018, and taking the Prelude honors earned him his seventh trip to the winner’s circle.

The IMCA Stock Cars put on their usual fast and furious bout of action on the track in their 25-lap Prelude feature.  Andrew Borchardt, from Plymouth, Iowa snatched the lead from his fourth starting spot to lead lap one.  Borchardt continued his run at the front of the pack, but he soon had Norfolk, Nebraska’s Justin Addison applying pressure with Addison taking a brief lead, only to have Borchardt charge back into the top spot.  Also throwing their hat into the ring were Elijah Zevenbergen and Troy Jerovetz.  Zevenbergen surged to the second spot as the laps wound down, tried several peeks in the corners for a way around leader Borchardt, but it wasn’t to be.  Borchardt never wavered on his run to the checkers, and swept to the win.  Zevenbergen finished in second place, third went to Troy Jerovetz, Brandon Czarapata, a former Super Nationals Champion, flew from nineteenth starting spot to take fourth, and Jeff Mueller came from twenty-first, to finish in the top five.

Borchardt, is a rookie in the IMCA Stock Car division, having previously piloted an IMCA Hobby Stock.

The IMCA Hobby Stocks had just begun their 25-lap main event on Saturday night, when Mother Nature threw a fit.  With two laps, the race was halted, and the decision made to postpone the remainder of that race, plus the Modified feature until Sunday noon, but then moved  to 4 p.m.

Round two of the Prelude began on Sunday with the IMCA Modified 25-lap feature, and once again, Mother Nature played her hand.

Jordy Nelson took advantage of his pole starting position, and grabbed the immediate lead when the race went green.  By lap five, Richie Gustin passed Steven Bowers to take over second place, and then set his sights on Nelson.  It took but two more laps before Gustin got the job done, taking over the top spot.  Then….Mother Nature decided to favor the track with yet another rain shower.  The race was yellow flagged, and the John Deere green quickly whipped the track back into racing condition.

When the race returned to green, Gustin maintained his command of the race, eventually pulling away to take the feature in easy fashion.  Jordy Nelson finished as the runner up. Steven Bowers held the third position, and Cody Laney just nipped Jimmy Gustin at the finish line as they took fourth and fifth respectively.

Gustin continues to live up to his nickname, “G” Money”, taking yet another $1,000 prize home to Gilman, Iowa.

The IMCA Hobby Stocks picked up where they left off, with two laps down in their 25-lap feature.  Dylan Nelson was leading from his pole starting spot, when the race began.  Second place runner Eric Stanton was immediately pestering Nelson, and after a couple of serious attempts, made the pass on the backstretch to lead as lap eight was scored.  From there on, Stanton drove off to score the easy victory.  Brett Vanous finished in the runner up position, and in the final circuits fifteenth place starter Zach Olmstead, Overton, Nebraska, surged through the pack to finish third.  Beatrice, Nebraska’s Jesse Vanlaningham finished in fourth after starting twelfth, and Craig Clift from Sioux City, was fifth from starting eleventh.

Tomorrow, September 3, the 36th Annual IMCA Super Nationals begins its traditional Labor Day week run.  The Deery Brothers Late Model Summer Series will run a complete show, and crown the first of the Super Nationals Champions.  The IMCA Northern SportMods and the IMCA Hobby Stocks will begin their qualifying for their big dance on Saturday.  The first race is scheduled for 2 p.m. 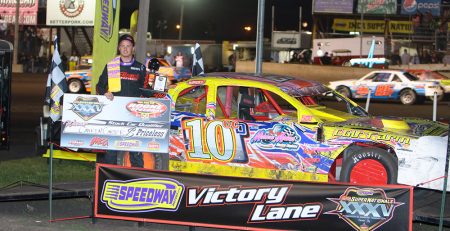 Due to the weather, we will have the following changes to today's (Mon., Sept. 7) program: The Late Model portion of... read more