The racers were out in full force on Saturday night as 173 drivers came to test their skill at the Boone Speedway.  Two new winners were crowned in the Modified and Hobby Stock classes, with repeats in the SportMod, Stock Car and Mod Lite divisions.  A King of the Hill champion was also crowned in the SportMods, and it proved to be a very popular win with the crowd.

The MADCRA Mod Lite 15-lap feature was led early by Travis Stensland, as he held off the challenges of Mike Kennedy and Andy Hennigar.  Hennigar got around Kennedy to take over second  and was then able to make the pass on the back chute, and took the lead at lap twelve.  Hennigar took the checkers by a comfortable margin, scoring his third victory at the track in 2013.  Stensland held on to second, and Terry Brown finished third.  Fourth went to Mike Kennedy and Bryan Zehm came from starting tenth to round out the top five.  The race went flag to flag.

The IMCA Northern SportMod feature was led start to finish by Brandon Williams, the former St. Joe, Missouri driver who now calls Des Moines home.  Paul Nagle pestered Williams much of the 18-lap contest, but would exit the track with three laps remaining.  Johnathan Logue inherited the runner up spot with Michael Murphy in close pursuit.  Williams, Logue and Murphy finished 1-3 followed by Cory Rose in fourth and Carter VanDenBerg was fifth after starting back in row six.  Williams took the checkers for the third time this season.

Earlier, after the SportMod heats were completed, a King of the Hill competition was held.  It pitted the top two finishers from the four heats.  The final round saw Tara Longnecker going up against Johnathan Logue.  The crowd showed their pleasure when Longnecker bested Logue, and in this case, was crowned QUEEN of the Hill.

The Modified 20-lap A main had just gotten started when an incident in turn one sent front runners Kyle Krampe and Mike VanGenderen to the back.  Pole starter 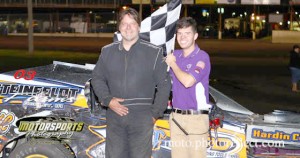 Tyler Prochaska was then the man in charge on the restart.  Billy Davis, Jr. made his way into second, continuing in that order to the checkers flying.  Shay Woods took third, fourth was Matthew Meinecke, and Jon Snyder dug his way to a fifth place finish after starting in row five.  Prochaska, the driver from Iowa Falls, scored his first win at the track.

The IMCA Stock Cars gave their usual exciting feature, going three and four wide throughout the field.  Rod Richards took the lead from Aaron Parmer at lap five but they would soon have company in Jay Schmidt.  Schmidt, who had started tenth, was third by lap five and took the runner up spot the following lap.  A restart situation at lap six was to Schmidt’s advantage, as he flew to the topside and around Richards who was hugging the bottom.  Schmidt would hold his lead the rest of the way to the checkers, scoring his fifth victory at Boone this year.  Wayne Gifford made headway in the latter part of the race, taking the runner up spot.  Third went to Donavon Smith who started in row six, fourth was Damon Murty who had started along side the winner in row five, and Rod Richards rounded out the top five.

The night cap was the 12-lap Hobby Stock feature.  Andrew Burg nabbed the lead by lap five on his way to scoring his first win this year.  Burg held off Eric Stanton who finished in the runner up spot, third was Matt Hudspeth and fourth was newcomer Nathan Ballard from Marengo.  John Watson, who is back in a Hobby Stock after a stint in a Stock Car, came from starting nineteenth, to take fifth.

Next Saturday night, August 24 is bike races and Wal-Mart bike giveaway night for the youngsters.  Racing in all five divisions continues plus the Karl Chevrolet Dirt Trucks will be making their second appearance.  Hot laps are 6:45 with racing at 7:30. 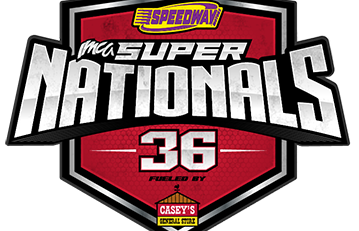 BOONE, Iowa – One of the premier races for IMCA Modifieds marks a milestone during the upcoming IMCA... read more