It was Christmas in July at the Boone Speedway on Saturday night and Santa himself was there to greet the youngsters.  Christmas music also filled the air and decorations were around every corner. However the 90 degree temperatures didn’t feel like the holiday season!

All five regular IMCA classes were in competition.  Repeat winners were Jake McBirnie in the Modified division, David Smith in the Stock Cars, Eric Stanton in the Hobby Stock class, and Mike Kennedy in the STARS Mod Lites.  The only new regular season winner came from the Northern SportMod class when Cam Reimers took the checkers.  The team of Zachary Dressic and Kody Ollin took the win in the final 2-person Cruiser race of the season.

The IMCA My Race Pass STARS Mod Lites kicked off the feature racing.  At the end of the 15 lap race, it was Mike Kennedy standing in victory lane for the third time this season.  Kennedy started tenth, and ran down leader Cory Sonner by lap eight, but it wasn’t until that final lap that he was able to make the pass in turn two, and go home to secure the win.  Sonner had to be content with the runner up spot. Third went to fifteenth place starter Joe Glick, who was hard charger of the race, fourth was Jon Braathun, and Ben George was fifth.

The Elmquist Towing IMCA Northern SportMods were up next for their 18 lap A main.  Bryan Johnson led the field to green and took command.  Brett Vanderheiden came calling and took over the number one spot on lap seven, but it was short lived.  By lap nine the leader was tenth place starter Cam Reimers who had taken advantage of several yellow flag restarts to move his way forward.  When Reimers got that lead established, it was all his from there on out, taking the checkers and his first win of the season.  Eleventh place starter Izac Mallicoat tried his best to run down Reimers, but could do no better than second.  Third went to Ryan Leeman, Kaylin Lopez was fourth, and Hunter Longnecker completed the top five.

Earlier in the evening, the Northern SportMods ran a Dash for Cash race with the top four in points, plus top finishers in the evening’s heats vying for the $400 prize.  Brett Vanderheiden took the win in the 12 lap race.

The D & E Outside Services IMCA Modifieds went 20 laps for their feature event.  Paul Nagle was looking strong as he led from the start.  Meanwhile, Jake McBirnie began his quest, moving through the field from starting twelfth and into second by lap eight.  Nagle held off McBirnie until lap thirteen, when McBirnie took over the top spot, and then was able to pull away in the final laps and win by nearly a straightaway.  Nagle took second, third went to Nick Roberts, Trenton, Missouri’s Cory Wray was fourth, and Mike VanGenderen was fifth.  This marked McBirnie’s third trip to victory lane at the speedway this year.

The Arnold Motor Supply IMCA Stock Cars ran their 20 lap feature next.  Scott Davis took over the lead from Ty Hill at lap six. Then soon all eyes were on the #8 of David Smith as he flew along on the topside, mastering the rim of the track as he began to run down the leader.  He got the job done with a handful of laps remaining and then went home to the flying checkers and the win.  Brother Devin Smith started twelfth and got by Davis in the closing moments as they went second and third respectively.  Fourth was Bob Daniels, and early leader Ty Hill was fifth.  David Smith came from eleventh place on the starting grid, to score back to back wins, and his fourth of the season.

Pole sitter Skylar Pruitt from Stuart, Iowa jumped to the immediate lead in the Pickett Salvage IMCA Hobby Stock 15 lap main event.  By lap five, it was eighth place starter Eric Stanton charging to the lead….never to give it up.  Stanton went on to take the flying checkers and making it win #five for the year.  Young Mike Smith took second after starting fourteenth, third went to Chad Rigby who ran up front all race long, Braden Richards was the hard charger of the race, coming from twenty-second starting spot to finish fourth, and Solomon Bennett was fifth.

Next Saturday, July 31, will be Salute to Veterans night at the races.  This will be the third of a three race series that includes the Clay County Fair Speedway in Spencer on July 28, and the Kossuth County Speedway in Algona on July 29. There will be free food, drinks, prizes, gifts, and more for veterans.  There is also an expanded purse and contingencies for the drivers.  More information can be found at the Boone Speedway Facebook page, and www.raceboone.com.  Grandstands will open at 4 for the festivities.  Hot laps are 6, with racing at 7.

BOONE, Iowa (Sept. 5) – Doug Smith took the lead on the first lap and stayed in front all... read more 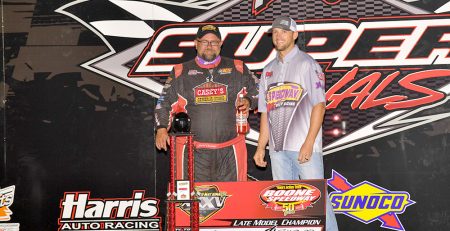