Reynolds crowned the Inaugural King of the Katwalks

Reynolds crowned the Inaugural King of the Katwalks

The Inaugural running of the King of the Katwalks for IMCA Stock Cars was held at the Boone Speedway on Saturday night.  The pits were swelled with 202 race cars in the five IMCA divisions along with the Outlaw Mini Mods joining them for a full night of racing action.

Chase Rudolf captured the Friesen Performance IMCA Modified feature, and it was Kaden Reynolds taking home the title of King of the Katwalks in the Sunoco IMCA Stock Cars.  The Friesen Performance IMCA Northern SportMod win went to Cole Fenske, and Mike Smith took a thrilling win in the Sunoco IMCA Hobby Stocks.  Austin Gray came home to the checkers in the IMCA STARS Mod Lite feature, and Nathan Kilwine took the honors in the Outlaw Mini Mods.

Austin Gray grabbed the lead on lap one of the 15 lap feature for the STARS Mod Lites, and held it the entire distance to claim his first ever trip to Victory Lane at the track.  Randy Bryan started tenth, fought his way past Joel Huggins on lap twelve, and finished a close runner up, with Huggins nipping at his heels in third.  Bryan Zehm was fourth, and Jon Braathun rounded out the top five.

The IMCA Northern SportMods ran their 18 lap feature next.  Cole Fenske ran down early leader David Hoover and took command on lap eight, never to look back.  The final laps saw Fenske crack the whip and pull away to a convincing win and take his first ever trip to the winner’s circle at the Boone Speedway.  Taylor Kuehl was impressive with her run from fifteenth starting spot to take second.  Danny Fye took third, Jake Sachau took fourth after starting twelfth, and veteran racer Robert Stofer, who jumped up from Stock Cars into the SportMod class this season, finished fifth.

Chase Rudolf took the flying checkers in the 20 lapper for the IMCA Modifieds.  Rudolf started from the pole and led all laps on his way to a first visit to Victory Lane.  Rudolf pulled away to a good lead but Russ Dickerson was able to reel him in and attempt a challenge.  However, it was to no avail as Rudolf flashed under the checkers first for the win.  Russ Dickerson was second, Mike VanGenderen powered by Ronn Lauritzen at the finish line as they went third and fourth respectively, and Brandon Leeman completed the top five. This was Rudolf’s first ever Modified victory at the speedway.

The Outlaw Mini Mods brought 27 entries for their first trip to the track this year.  They ran 15 laps for their main event.  Nathan Kilwine, Glenville, Minnesota started tenth, and was in the lead with just a handful of laps in the books. He then pulled away to take the easy victory.  Following a distant second was twelfth place starter, Ben Kraus, third went to Kamdyn Haggard, fourth was Dalton Faber, and Bobby Daniels took fifth.

The headliner for the night’s racing was the Inaugural King of the Katwalks for the IMCA Stock Cars, thanks to Fox Welding/Vermeer, and VanEaton Pork,….paying $2,500 to the winner, a good payback through the field, and $260 just to start the feature.

The Class too Tough to Tame came out in full force, with 57 cars checked in.  After qualifying though six heats, and three B mains, 24 cars were locked into the feature.  Two track provisionals were added, Josh Daniels and Tyler Pickett who were tops in track points that had not qualified, making it a 26 car starting field.

First and second in the six heats came to the frontstretch to determine their starting spots, and after a rousing game of “keep it, or pass it”, it was Jake McBirnie that held the #1 starting position, and rookie to the class, Kaden Reynolds would start to his outside.

McBirnie held down the lead as lap one was scored, but on lap two, it was Reynolds with the upper hand.  Reynolds was content to run out front while a big battle was brewing behind him with Jeff Mueller, Damon Murty, Travis Barker, and Devin Smith duking it out.  Reynolds happily sailed along untouched as the race wore on, and as the checkers flew to the rookie, he snagged the crown to the first running of the King of the Katwalks at the Boone Speedway.  Jeff Mueller came home in second place, holding off Damon Murty in third.  Devin Smith took fourth, and Travis Barker claimed fifth.  The race went 31 laps, green to checkers.

Reynolds was a happy camper in his post race interview in Victory Lane.  The young man out of Cedar Rapids, Iowa had great success in the IMCA Hobby Stocks, and is in his first season in the IMCA Stock Car class.

The IMCA Hobby Stocks put a night cap on the racing.  They went 20 laps in their feature.  Chad Rigby looked poised to getting his first win, taking the lead on lap three.  Meanwhile Mike Smith had been running him down and with just a few laps remaining was throwing some hard challenges, but to no avail.  Then a caution on lap fourteen, set up a green-white-checkered finish.  Smith threw a slide that didn’t stick with a lap remaining, but a second try stuck as they came to the checkers, Smith winning by a nose, and Rigby finishing no doubt, a disappointing second.  Veteran racer Wayne Gifford was third, fourth went to John Watson, and pole sitter, Tanner Jones was fifth.

Racing continues at the Boone Speedway next Saturday night, July 2, with racing in the IMCA Modifieds, Stock Cars, Northern SportMods, Hobby Stocks, and STARS Mod Lites.  Please note starting times will be hot laps at 5, and racing at 6 until further notice.

Godwin to start from the pole

Nyle Godwin will start from the pole with defending champion Sean Johnson to his outside in Thursday’s qualifying feature... read more 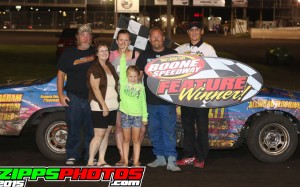 June 27, 2015 There were more new winners stepping into Victory Lane at the Boone Speedway on Saturday night.  First... read more

August 31, 2013 It was season championship night at the Boone Speedway on Saturday night, ending the regular season of... read more