Weekly racing continued at the Boone Speedway on Saturday night with racing in all six weekly divisions.  There were 138 cars checked into the pits, for a full night of racing action.  Randy Roberts claimed his first IMCA Modified feature at the track, as did Scott Davis in the IMCA Stock Car class.  Jake McBirnie made it three in a row in the IMCA Northern SportMod division, John Watson matched the three in a row title by winning the IMCA Hobby Stock feature again, and Mike Moore in the IMCA RaceSaver Sprints, and Joe Glick in the Mod Lite class, both made return visits to victory lane.

Things kicked off with the running of the 15-lap Mod Lite feature.  The action was marred by two red flag situations that found  Chelsea May upside down on the backstretch before a lap was scored, and later, Lisa Birt went for a tumble on the front stretch.  Both were okay.

Charlie Brown led when the race did get underway, only to have it quickly snatched away by Bryan Zehm at lap three.  A yellow flew at lap six when Charlie Brown went spinning, and on the restart, it was Joe Glick getting the upper hand, shooting to the lead.  From there on, Glick held the lead to the checkers, taking the win by a comfortable length over second place Travis Stensland.  Zehm held on for third place, fourth went to Tanner Gannon, and Mike Kennedy was fifth.  Glick has three wins at Boone this year.

Jake McBirnie survived a plethora of cautions in the IMCA Northern SportMod 18 lap main event to score another win.  McBirnie took the lead when then leader Austin Luellen drifted high on a restart situation at lap ten, then weathered another yellow at lap fourteen to score the victory.  Luellen held the second position, Dustin Lynch was third, fourth went to Johnathon Logue, and Ryan Leeman was fifth.  McBirnie stepped into the winner’s circle for the fourth time this season.

Mike Moore was victorious in the IMCA RaceSaver Sprint 20 lap feature.  Moore started eighth and grabbed the top spot from Val Urman with a handful of laps in the books.  Moore then stretched his lead on his way to the checkers.  Urman held on to second place, Matt Richards, the previous race winner was third, Joel Thorpe was fourth and Devin Wignall completed the top five.  This was also Moore’s fourth win at Boone this racing season.

Veteran racer Scott Davis nabbed the lead by lap one of the 18 lap IMCA Stock Car A main, and kept the hounds at bay for the duration, leading all laps on his way to victory lane for the first time.  There was a battle behind him for position with close racing action the entire time.  Donavon Smith started ninth, and won the battle for the runner up spot, just beating out third place Rod Richards, and twenty-sixth place starter Josh Daniels in fourth.  All three crossed the line in a near photo finish.  A close fifth place went to Tyler Pickett.  Davis, who saw much success in the Stock Car class in days gone by, more recently had piloted a SportMod and then a Modified with wins in both classes, just returning to the Stock Car class this season.

Another driver taking his first trip to the winner’s circle in 2018 was Randy Roberts.  Roberts, who previously raced in the SportMod division started pole position in the 20 lap IMCA Modified feature, and led all laps on his way to the flying checkers.  Second place finisher Tony Hofbauer tormented Roberts much of the race, but had to settle for the runner up spot.  Chad Louk finished in third, fourth went to tenth place starter Mike VanGenderen, and Eric Elliott rounded out the top five.

John Watson scored his third win in a row in the 12 lap IMCA Hobby Stock class.  Watson came from eighth starting spot to take the lead on lap five, and held off the pack to score another win.  Twelfth place starter Andrew Burg worked his way through the field to score the runner up position, Rusty Gyles was third, Todd Bass took fourth, and Solomon Bennett was fifth.

The 2-person Cruisers were also on the docket for the evening’s entertainment, running only a 12-lap feature event.  The duo of Sheldon Richardson and Brandon Strait took the checked flag and the win. Lucas Boring and Ty Matuera finished in second, third went to Jordan Leeper and Jonathon Wallar, and fourth to Dean Taylor and Jessiah Taylor.

September 2, 2017 Boone Speedway held it's third annual Prelude to the Super Nationals on Saturday night as well as... read more 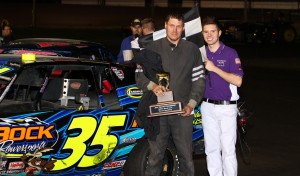 BOONE, Iowa – Tech inspection, an open practice session, some music and a pretty awesome party are planned for... read more