It was another Saturday night Series of Weekly points racing at the Boone Speedway on Saturday night.  Mother Nature threatened early, but this time the track won out without any issues.  Two drivers found victory lane for the first time, one returned, while two others made another of frequent visits.

Things kicked off with the 15 lap IMCA My Race Pass STARS Mod Lite A main.  After his first appearance of the year last week, Travis Stensland found his way easily around the track, and led all but the opening laps on his way to victory.  He finished well ahead of second place Mike Kennedy, who started tenth on the grid. Third went to Joe Glick, Bryan Zehm was fourth, and Josh May completed the top five.

Johnathon Logue moved his ride from starting sixth, and into the lead at lap three in the IMCA Elmquist Towing Northern SportMod 18 lap main event.  From there on to the finish, Logue was untouched on his drive to the checkers and the win.  Izac Mallicoat chased Logue much of the race, but had to be content with second place.  Third went to Dustin Lynch, Dusty Masolini was fourth, and Chowchilla, California racer, Kaylin Lopez who is spending his summer racing in the area, started fourteenth, and finished in fifth.  This marked weekly win number eight for Logue, plus he also won the Frostbuster special.

The 20 lap D & E Outside Services IMCA Modified feature looked to be a runaway as Jimmy Gustin led the troops to the green, and appeared to have the race well in hand.  That is until a yellow flew at lap eighteen, setting up a green-white-checkered finish.  Nick Roberts had reeled in Gustin and was eager for the restart of the race.  Gustin was looking strong as he took the white flag, but a slight slip up the track in the final corners was all that Roberts needed, as he took the lead and went home to the flying checkers.  Two more cars were able to slip by Gustin as well in the closing moments, with thirteenth place starter Jake McBirnie taking the runner up spot, and Denison, Iowa’s Dan DeMey scoring third place.  Gustin finished a no doubt disappointing fourth, and Mike VanGenderen took fifth.  This was Roberts’ second feature win at the speedway this season.

A young driver who has been on fire this season, made it look easy when he took the win in the IMCA Arnold Motor Supply’s 20 lap Stock Car feature.  That driver would be Dallon Murty, the Chelsea, Iowa hot shoe.  Murty started fourth and had the lead by the time lap one was in the books.  From there on out, he was on cruise control, and took the easy win.  Jeff Mueller chased Murty for most of the race, but could do no better than second.  Third went to Tony Hofbauer, Matt West was fourth, and pole sitter Tom Cannon was fifth.  This was Murty’s first weekly win at the track.

The IMCA Pickett Salvage Hobby Stocks put the night cap on the racing as they ran their 15 lap feature.  Aron Fye led the field through lap nine, but it was Aaron Rudolph taking command at lap ten, bringing along Eric Stanton to tuck into second.  Rudolph and Stanton went at it in a good side by side battle for a couple of laps before Stanton established the number one spot for good and went home to the win, Rudolph going second.  It was a great shoot out for the next positions, but in the end it was it was twelfth place starter Josh VanCannon taking third place.  Early leader Aron Fye was fourth, and Seth Butler finished fifth.  Stanton started tenth and took his sixth regular feature win of the year.

Already track champion at Luxemburg and Seymour and a national championship contender, Brandon Czarapata has his eyes on a... read more 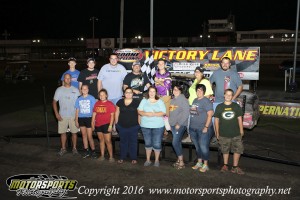 July 30, 2016 It was Christmas in July Saturday night at the Boone Speedway, and the drivers getting the wins... read more