VINTON, Iowa (July 30) – Fifteen drivers have already been elected to the starting field and the second round of voting begins at noon today (Tuesday) underway to determine 13 more drivers who will take the green flag in the Friday, Sept. 6 Fast Shafts All-Star Invitational.

The All-Star Invitational will be held at Boone Speedway during the IMCA Speedway Motors Su­per Nationals fueled by Casey’s. Top three vote recipients elected to the All-Star field from each of the five Modified regions, all of whom have confirmed they will be competing, include:

The drivers with the next 25 highest vote totals have been pooled for round two of All-Star voting, to be conducted exclusively through the IMCA Facebook page through noon on Tuesday, Aug. 6.

Completing the starting grid for the 30-lapper will be All-Star candidates with the top national point to­tal and the most feature wins as of Aug. 30 in attendance at Super Nationals.

After  a delay of an hour and 15 minutes due to wet weather, the jet dryer is making its... read more 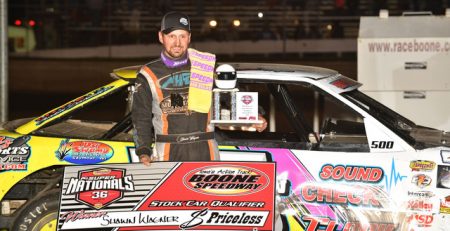