Boone Speedway held its season points opener on Saturday night as the IMCA Modifieds, IMCA Sunoco Stock Cars, IMCA Karl Kustoms Northern SportMods, IMCA Sunoco Hobby Stocks, and for the first time running under the IMCA banner, the IMCA Stars Mod Lites, as they all began their quest for a track championship.

The IMCA Stars Mod Lites kicked off feature racing with their inaugural IMCA sanctioned 15-lap main event.  Jon Braathun led the opening laps, only to have Cody Yaw take over the top spot by lap four.  Yaw’s lead would end just four laps later when he and a lap car collided, bringing out a yellow.  Second place runner Joel Huggins inherited the lead for the restart,  and would go on to be in command the remaining laps and take the checkers ahead of Josh May.  Tenth place starter Randy Bryan crossed the line in third place, Mike Kennedy in fourth, and early leader Jon Braathun in fifth.  However, Huggins was disqualified after a post race inspection found his body not meeting the spec requirements.  This handed that inaugural IMCA sanctioned win then over to Josh May.

Chad Ryerson would lead all 18 laps of the IMCA Karl Kustoms Northern SportMod feature on his way to the checkered flag.  Ryerson started on the outside pole and had no trouble keeping his competition at bay on his way to victory lane.  Shawn Harker, Nebraska City, Nebraska made the trip over to Iowa’s Action Track and took home the runner up spot.  Third went to defending track champion, and last week’s Frostbuster winner, Johnathon Logue.  Dustin Lynch, and Michael Johnson, Bakersfield, California, completed the top five.

Tim Ward took home the win in the IMCA Modifieds.  He wrestled the lead away from Jimmy Gustin at lap eleven and pulled away to take the comfortable win.  Nick Roberts finished a distant second, and Santa Maria, California’s Dylan Thornton was third.  Jimmy Gustin was fourth, and Jeremy Mills just beat Joel Bushore to the line as they finished fifth and sixth respectively.  Ward is the defending track champion.

The IMCA Sunoco Stock Cars were up next for 20-laps of feature racing.  Devin Smith started on the outside front row and immediately grabbed the lead….never to relinquish it.  Smith was gone and easily outdistanced second place finisher Jeff Mueller.  Michael Jaennette, Tommy Fain, Abilene, Texas, and Dan Mackenthun, Hamburg, Minnesota rounded out the top five.

The IMCA Sunoco Hobby Stocks put a night cap on the evening’s racing with their 15-lap main event.  Michael Smith would also lead this one from start to finish on his way to the checkered flag.  Eric Knutson applied the pressure to Smith, looking outside, then inside, but to no avail.  Knutson had to be content with the runner up position on this night.  Eric Stanton came from sixth starting spot to take third place, fourth went to Bedford, Iowa’s Luke Ramsey who started seventeenth, and Jack Phillips finished fifth.

Regular season racing continues next Saturday night, April, 17. Pits open at 4, grandstands at 4:30, hot laps at 5, and the green flag drops at 6.

Gustin gives scheduling of Modified B features an A

BOONE, Iowa (Sept. 7) – The way Richie Gustin figured it, the scheduling of the evening’s B features had... read more

11am: There will not be any Sport Mod racing at tonight's Eve of Destruction, but we will have plenty... read more 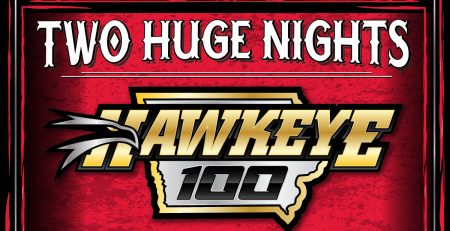 Hawkeye 100 in Boone with World of Outlaw Late Models

ALL DIVISIONS RACING FOR A HIGH-DOLLAR PURSE AT BOONE SPEEDWAY In less than two weeks, the World of Outlaws Morton... read more