A warm and humid night greeted the fans and drivers at the Boone Speedway on Saturday as 170 race cars packed the pits for some racing action.  Veteran racer Kelly Shryock would step into Victory Lane when he took the checkers in the IMCA Modified class.  Devin Smith got a late race victory in the IMCA Stock Car division, and Dusty Lynch made a long awaited return to the winner’s circle when he won the IMCA Northern SportMod feature event.  Eric Knutson captured his third win of the season in the IMCA Hobby Stocks, and Tanner Gannon won for the first time this year when he took the checkers in the Mod Lites.  The Outlaw Mini Mods were on tap for the evening as their traveling series came to town.  Kelly Steele took home the win in that class.  There was a new duo of winners in the two-person Cruisers with Jeremy Bruce and Shannon Swallow going home with that trophy.

The Mod Lites kicked off the night’s feature racing with a 15-lap feature.  Tanner Gannon would lead this one from wire to wire to secure his first victory of the season at the speedway.  It was tight racing behind the winner as cars fought for position, with Randy Bryan winning the battle to take the runner up spot.  Close behind in third place was Mike Kennedy who had started in ninth position, fourth went to Bryan Zehm, last week’s winner, and tenth place starter Travis Stensland rounded out the top five.  This was Gannon’s first win at the track this season.

The traveling series of Outlaw Mini Mods ran a 15-lap feature next.  Kelly Steele made the long trip down from International Falls, Minnesota and made it pay off when he won the main event.  Another International Falls racer, Tyler Jonson started fifth and took the runner up position.  Scott Johnson, Owatonna, Minnesota would lead briefly but fell back to finish in third place.  Logan Brown, Clear Lake, Iowa took fourth place, and Michael Bryant, Mason City, Iowa finished fifth.

After a call back on the initial start of the IMCA Northern SportMod 18-lap A main, the race would go green to checkers.  Robert Moore was looking to win his first feature as he pulled away in the early portion of the race.  However, Dusty Lynch was reeling in the leader lap after lap and at lap fifteen, made the pass into the lead.  Lynch then held that lead the rest of the way to the checkers and the win. Moore had to settle for the runner up spot. Cory Pestotnik started eighth, and finished a close third.  Twelfth place starter Johnathon Logue took fourth, and ninth place starter Dusty Masolini completed the top five positions.

Kelly Shryock stated in Victory Lane that it had been a long time coming to get a feature win at the Boone Speedway, but at the end of the 20-lap feature for the IMCA Modifieds, that is just what he did.  Shryock had to fend off some tough competition close behind him much of the race as Randy Havlik, Paul Nagle and visiting racer from Corbett, Oregon, Collen Winebarger jousted for position.  Paul Nagle made the move around Randy Havlik in the closing laps as they finished second and third respectively.  Winebarger would take fourth place and fellow Oregonian, Grey Ferrando from Stayton, took fifth.

The 20-lap IMCA Stock Car  feature was a real nail bitter right down to the final moments.  Justin Nehring and Jay Schmidt got out in front early and were content to let the rest of the field fight it out behind them.  Devin Smith would finally break out of the pack of cars and began the chase to catch the leaders.  He did so with just a few laps remaining, and with the help of a lap car on the final circuit, Smith dove low and stuck it to sneak around both Nehring and Schmidt and beat them to the checkers first.  Jay Schmidt took second place and Justin Nehring took third.   Two of the winner’s brothers would complete the top five with Donavon Smith taking fourth, and David Smith coming home in fifth.  This was Devin Smith’s second feature win of the season.

Eric Knutson made a charge through the pack of IMCA Hobby Stocks, starting eleventh, and grabbing the lead on lap ten of the 15-lap event.  Dylan Nelson took several peeks in the closing laps for a way around Knutson, but would fall short and have to settle for second behind winner Knutson.  Aaron Rudolph came home in third place, Jack Phillips took fourth, and pole sitter Shane Butler was fifth.  This marked Knutson’s third visit to the winner’s circle in 2020.

Racing continues next Saturday night at the Boone Speedway.  Grandstands open at 5, hot laps at 6:15, and the green flag drops at 7 p.m.

CANCELLED due to rain!    BOONE, IA - Something for everyone is guaranteed during the Sunday, July 4 Eve of Destruction... read more 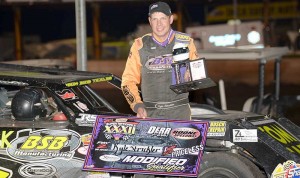