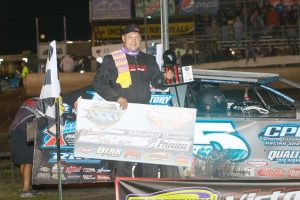 Shute drew the pole start and led start to finish. He ran three wide with lapped traffic in the final circuits, winning in front of Justin Auringer of Evansdale, Jay Noteboom of Hinton and Jeremy Mills of Garner.

“It’s been 10 years since I was on this stage. There was a great field of drivers behind me,” Shute said post-race. “I can’t believe this is happening.”

Thornton, who’d been disqualified in post-race tech on Thursday, led the last 21 laps of the night­cap, which saw Gustin motor all the way from 26th starting to a transfer spot in just 11 laps. Havlik caught Jordy Nelson for fourth at the finish line.

“The car was real good,” said Thornton, also qualified for the Saturday night Stock Car champion­ship event. “I peeked and saw him (Gustin) coming. I ran through the middle and tried to run as hard as I could.”

Top four qualifiers from each Friday feature advance to the outside row of Saturday’s main event. The final nine cars will be added in last-chance races.

Noteboom is now an 11-time qualifier while Shute starts his career 10th Saturday show. Havlik made the Modified main for the eighth time, Auringer for the seventh, Mills for the sixth, Gustin and Thornton both for the fifth and Alvarado for the 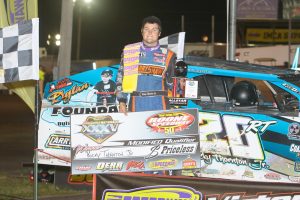