It was another weekly IMCA racing series at the Boone Speedway Saturday night.  Nick Roberts returned to victory lane when he snagged the IMCA Friesen Performance Modified win.  It was Devin Smith getting a first win of the season in the IMCA Sunoco Stock Cars, and Alec Fett won the IMCA Friesen Performance Northern SportMod main event.  Mike Smith repeated in the IMCA Sunoco Hobby Stocks, and Jason Toppenberg got a first win in the IMCA STARS Mod Lite division.  The 2-Man Cruiser win went to the team of Jesse McCollough and Dustin Hanson.

The STARS Mod Lites ran their 15 lap feature flag to flag.  Early leader was Joel Huggins until Jason Toppenberg, snatched the top spot away on lap three.  The two swapped the lead back and forth for several laps until Toppenberg was able to finally establish the top spot for good and then went home to take the flying checkers and the win.  Joel Huggins held down the runner up spot, and following a distance behind in third was Randy Bryan.  Joe Glick and Jeff Stensland rounded out the top five.  Toppenberg, just returned to racing this season after several years hiatus.

Alec Fett, Burt, Iowa started on the pole of the 18 lap feature for the IMCA Northern SportMods, and led all laps on his way to victory.  Sixth place starter Cam Reimers dogged Fett for much of the race, but in the end, had to settle for a distant second.  Jake Sachau started eighth, and finished a close third.  Rocky Caudle and Cory Pestotnik completed the top five.  This was Fett’s first win at the track this year.

Earlier in the evening, the Northern SportMods ran a King of the Hill competition. The top eight were locked in from their track points standing, and the other eight qualified through the earlier heats.

The King of the Hill was sponsored by Wausau Homes of Huxley, and Matt Beerbower. It paid $1,000 to win, with a nice payout for the top eight.  Going home with the crown was Jake Sachau who beat out Izac Mallicoat, Dusty Lynch, and Dusty Masolini in the final round.

The IMCA Modified’s 20 lap feature came next.  Matthew Meinecke held the upper hand in the early going with Ronn Lauritzen giving chase.  A caution at lap ten bunched the field for the restart. That’s when mover and shaker Nick Roberts saw his opportunity as he shot from third and into the lead before lap eleven was scored.

There was hot and heavy battling going on behind leader Roberts, but it was Mike VanGenderen taking the runner up position, as he held off Matthew Meinecke in third, Ronn Lauritzen finished fourth, and Jimmy Gustin was fifth.

There was lots of great racing action in the 20 lap IMCA Stock Cars, aptly called “The Class too Tough to Tame”.

Fourth place starter Mike VanGenderen grabbed the lead away from Cody Doolittle on lap two, only to have tenth place starter Devin Smith come out of nowhere and take over the very next lap.  Then Michael Jaennette, who started eleventh, threw his hat into the ring as well, as did Austin Meiners and sixteenth place starter, brother David Smith.

It was a great battle between all the top runners and then VanGenderen was suddenly out of the running as he pulled into the infield.  The other top dogs were still battling hard, but no one could catch Devin Smith.  He held on to the top spot and took the double checkers to secure his first win of the year at the track.  Jaennette took second, David Smith was third, Austin Meiners took fourth, and Josh Daniels finished fifth.

The IMCA Hobby Stocks saw Mike Smith put yet another notch in his belt, winning the 15 lap feature.  Smith started tenth, and ran down then leader Seth Butler just before the halfway mark of the race.  On lap eight, Smith was leading.  He was then gone….pulling away to take another easy victory.  Butler trailed a distant runner up, Curt Reed was third, John Watson, last week’s winner was fourth, and Chad Rigby came from eighteenth, to finish fifth. This was Smith’s fifth regular season win, also having won the Frostbuster special. 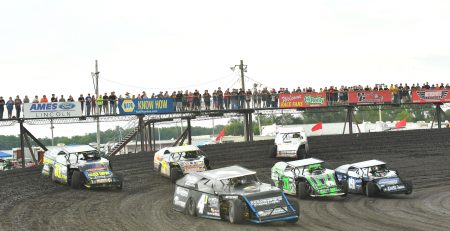 BOONE, Iowa (Sept. 3) – Qualifying races for Hobby Stocks and Northern SportMods are on the schedule for Labor... read more 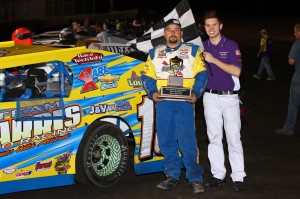 MARSHALLTOWN, Iowa – After a couple of near misses, Jimmy Gustin’s patience finally paid off. The veteran earned his... read more

Jill George won the first of five Deery Brothers Summer Series heat races and as a result she’ll be the first female driver to start a Late Model main event at Super Nationals.