The race cars were not the first to hit the track at Boone Speedway on Saturday night. It was the Boone High School Class of 2020 that got to parade down the frontstretch and take the checkered flag first.  When regular racing began it was Doug Smith winning for the second week in a row in the IMCA Elmquist Towing Northern SportMods.  Ricky Thornton, Jr. won the IMCA Snap-On-Tools Modified feature, and Troy Jerovetz won the IMCA Arnold Motor Supply Stock Car main event in convincing fashion.  It was Eric Knutson hard charging to the front to take the Pickett Salvage IMCA Hobby Stock checkers, and Bryan Zehm flashed across the finish line first to take the win in the My Race Pass Mod Lites.  There was a new winning combination in the two-person cruisers, with the team of Dale Jones, and Bobby Smith taking home the trophy.

Mike Kennedy was the early leader in the Mod Lite 15-lap feature.  Bryan Zehm was on the hunt however, and by lap six was the new leader.  Kennedy would hang close until the final laps when Zehm pulled away to take the comfortable win, Kennedy having to be content with the runner up position.  Randy Bryan took third, Jon Braathun was fourth, and Joe Glick rounded out the top five.

Up next was 18-laps of IMCA Northern SportMod racing.  Curtis Veber looked to be on his way to capturing the checkers until a caution at lap eleven tightened the field on the restart.  By this time, it was Colton Nelson in the runner up position, and Doug Smith now running third.  This was just what Smith was hoping for, as on the restart, he flew to the lead, and from there on, never looked back.  Veber took second place, third going to Colton Nelson, Daniel Taser was fourth, and Johnathon Logue finished fifth.  Smith, who started eleventh, won for the second week in a row, and his third of the year at the speedway.

Ricky Thornton, Jr. showed once again just why he has been so successful behind the wheel of a race car. RT started twelfth in the 20-lap A Main for the IMCA Modifieds, and put another notch in his belt when he took the checkers.  He caught early leader Thor Anderson with eight laps in the books, and then the two exchanged sliders with Thornton establishing the top spot on lap eleven.  He would then remain in charge the rest of the race and finish nearly a straight away ahead of second place Anderson.  Nick Roberts tried the high line, and low line in his quest to catch the leaders, but had to settle for third.  Fourth went to Tim Ward who started eleventh, and veteran Russ Dickerson finished fifth.  Thornton also won the King of the Hill held earlier in the evening. He topped all other fifteen cars that competed in the contest.

Troy Jerovetz took command at lap four of the IMCA Stock Car 20-lap feature, and dominated from there to the checkers.  He finished well ahead of second place Kyle Everts.  Scott Davis had a good run coming from eleventh starting spot to finish third.  Donavon Smith, last week’s winner, searched high and low to find the best line but could only get to fourth place this night.  Pole sitter Ben Walding completed the top five.

Capping off the night’s racing was the 15-lap IMCA Hobby Stock feature.  This one came right down to the wire with Eric Knutson getting past Bryant Johnson in the closing laps to capture the win.  Following second place Johnson  was Daniel Smith in third, Curt Reed took fourth, and Jeremiah Andrews was fifth.  Knutson hard charged from eighteenth starting spot to take his first victory of the season.

Racing continues next Saturday night, June 20 with pits opening at 3:30, grandstands at 4, hot laps at 5, and the green flag drops at 6. 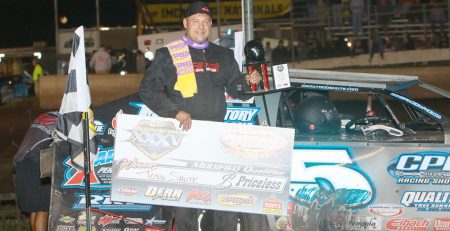 CANCELLED due to rain!    BOONE, IA - Something for everyone is guaranteed during the Sunday, July 4 Eve of Destruction... read more 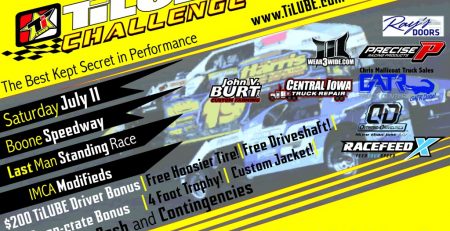 Don't miss the TiLube Challenge on Saturday, July 11 with over $1,000 in cash and contingencies! read more