Snyder, Pruitt, McBirnie, Overton and Glick all winners at Boone 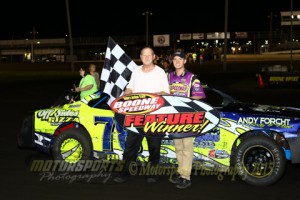 Snyder, Pruitt, McBirnie, Overton and Glick all winners at Boone

The Boone Speedway held it’s ninth consecutive weekly race of the 2015 season on Saturday night.  New winners for the year came out of the IMCA Stock Car and the Mod Lite classes, while all other divisions had repeat winners from previous weeks.   The exciting finishes and close racing showed why Boone is called Iowa’s Action Track.

The 15-lap Mod Lite feature was led early by Cory Dennis and Joe Glick quickly got to his tail to run second.  Glick got the upper hand at lap eight, snatching the lead away.  From there on, he would lead the rest of the way to the checkers, securing his first win at the speedway this season.   Dennis remained in second place until the final lap, when his motor let go in turn four in a cloud of smoke, leaving his ride disabled.  Randy Bryan took the runner up spot, third went to Cory Sauerman, Bryan Zehm was fourth and Charlie Brown was fifth.  The race went green to checkers.

Most of the 18-lap IMCA Northern SportMod feature was a battle between two drivers, Brandon Williams and Jake McBirnie.  Williams took command of the lead at lap five with McBirnie right behind.  From there on, the two raced side by side, lap after lap, with Williams holding the slightest of advantages.  The two worked around lap traffic, remaining in the tight contest right up to the closing moments.  McBirnie managed to take the lead with a lap remaining, but Williams wasn’t done yet.  The slide job out of corner four as they came to the checkers didn’t work, as McBirnie held on for the win, Williams having to settle for the runner up.  Third went to fifteenth place starter, Doug Smith, veteran Rick Ringgenberg was fourth and Randy Roberts drove from starting twelfth to finish in the top five.  McBirnie claimed his third win of the season.

The IMCA Modifieds ran their 20-lap feature next.  Tony Cox took the lead from his outside front row starting spot, and kept the field at bay through lap seventeen.  Jon Snyder ran down the leader, and then seized his opportunity on lap eighteen, getting around Cox for the lead.  He kept that lead to the checkers, taking his second win at Boone in 2015.  The final run to the finish line found Josh Truman slip by Cox as they finished second and third in that order.  Fourth place went to Russ Dickerson and pole sitter Cole Ferguson completed the top five.  The race went caution free.

Todd Fisher, the driver out of Norwalk, Iowa appeared to be on his way to getting his first visit to Victory

Lane in the IMCA 18-lap Stock Car A main.  Don Vis ran second until lap thirteen when he found himself dead in the water at the top of turn four, bringing out a yellow.  The restart had Terry Pruitt sitting in second place when things got back under way.  Two laps later, Pruitt took the lead and then held it to the waving checkers and the win.  He had to fend off the advances of Donavon Smith, ninth place starter, who made a late race charge to finish in second.  Third went to point leader Jay Schmidt who came from starting tenth, fourth was Todd Fisher and Robert Stofer finished in fifth.  This was Pruitt’s first win at Boone.

Regular point racing continues next Saturday night, June 27 with racing in all five divisions.  Hot laps are 6:45 and racing at 7:30.

All time record continues to grow

July 20, 2013 It was Christmas in July at the Boone Speedway on Saturday night.  The kids got to visit... read more 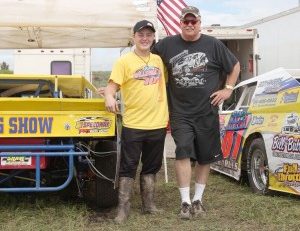 No stranger to Boone

Tom Charles is no stranger to Boone Speedway but this is the first year he’s brought a teammate to Super... read more