Strickler led all 40 laps of Saturday’s Modified main event at another record-setting IMCA Speedway Motors Super Nationals fueled by Casey’s. The victory lane scene that followed was an emotional one.

“This is the greatest race ever. Winning it means so much to me,” he said, pausing several times to wipe away tears of joy. “There is so much history here. I’d always wanted to put my name of the T-shirt and now I’ve done it.”

Strickler had been disqualified from a runner-up finish in his Wednesday qualifier for use of unapproved wheels. He won his Friday qualifier and started at the front on the outside row in Saturday’s big dance. 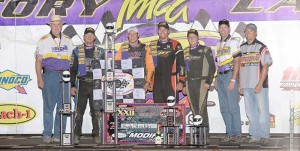 “It was pretty cool to be able to rebound that way at Super Nationals, and to start a row further ahead than we could have,” he said. “If it’s meant to be, it’s meant to be. This is just phenomenal.”

After a multi-car pileup on the front stretch that stopped the race on lap 18, the feature stayed green to the finish.

A purse of more than $250,000 was paid to, and a similar dollar value in cash and contingencies was awarded to drivers from a record 27 states entered in the 32nd annual version of America’s Racin’ Vacation. The car count of 866 nearly matched the mark of 874 set two years ago.

The common theme to Saturday’s other three main events was family.

Johnathon Logue, son of five-time Modified champion John Logue, was reeling in leader Randy Roberts before a lap 17 restart in the SportMod main. He was in first when the next circuit as scored and drove to his first Super Nationals title, good for $1,925.

Keith White ended a string of bad luck at Boone by winning the Harris Auto Racing Race of Champions for Modifieds.

Austin Luellen led all 10 laps of the Stephenville Starter Race of Champions for Hobby Stocks. That victory paid $800.

Older brother Clinton then all 10 laps of the BSB Manufacturing Race of Champions for SportMods for a $1,300 payday.

Gustin and Tyler Droste both qualified for the Deery feature and Saturday’s Modified show.

6-15-2013 Rain would cut short the final feature on Saturday night when a surprise shower hit during the hobby stock... read more

May 5, 2018 Boone Speedway held the first of it's Super Saturday shows with the IMCA Modifieds vying for the... read more 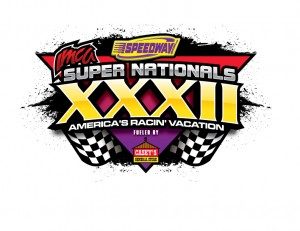