One hundred sixty-one race cars packed the pits at Boone on Saturday night for their second weekly show of 2018. Ricky Thornton, Jr. won a thrill packed IMCA Modified feature, Johnny Spaw took the win in the IMCA Stock Car class,  and Austin Luellen repeated his win from last week in the IMCA Northern SportMod A main.  Andrew Burg was victorious in the IMCA Hobby Stock main event, it was Mike Moore taking the checkers in the IMCA Racesaver Sprints debut of the season, and Travis Stensland won the feature in the Mod Lite division.

The early portion of the 15-lap Mod Lite feature was a battle between Bryan Zehm and Travis Stensland.  Stensland was finally able to make the pass for the lead on lap six and then put distance between himself and the rest of the field as he motored to a comfortable win.  Zehm held the runner up spot, third went to Randy Bryan, Joe Glick went fourth and Mike Morrill completed the top five.  Stensland started ninth on the field to take his first win at Boone in 2018.  The race went caution free.

It was Johnathon Logue, Doug Smith, and Austin Luellen duking it out in the early going of the IMCA Northern SportMod main event.  A slight bobble by leader Smith allowed both Logue and Luellen to slip around him as the chase continued.  The three continued their tight battle as the race wound down.  Luellen managed to get the upper hand on the white flag lap, and then held on for the win.  Smith and Logue finished a close second and third.  Jake McBirnie was fourth and Hunter Longnecker had an impressive run from twenty-second starting spot, to finish in fifth.  Luellen, who started eleventh, repeated his win from last week.

The IMCA Racesaver Sprint Cars made their debut for the 2018 season, and Mike Moore, last year’s track champion, put it in victory lane again.  Moore took command at lap eleven, and never looked back.  Tyler Thompson finished as the runner up,  C. J. Houseman took third over Devin Wignall and Joel Thorpe in fourth and fifth respectively.

Johnny Spaw won an amazing IMCA Stock Car race that thrilled the crowd.  He was able to get the best of Wayne Gifford,  just nipping him at the finish line after the two battled lap after lap.   Third place finisher, Troy Jerovetz was in the thick of the battle up front much of the time as well, and just managed to hold off Michael Murphy who finished fourth, and close behind, Donavon Smith in fifth. Spaw, a veteran racer from Cedar Rapids, took his first ever win at Boone.

Not to be out done, the IMCA 20-lap Modified feature was quite the thriller as well.  Eric Elliott led the opening laps but it was Ricky Thornton that quickly made his way from ninth starting spot, to be on Elliott’s tail.  Thornton made the pass for the lead at lap seven, and pulled away looking destined for the easy win.  However, a caution at lap fourteen made it interesting on the restart.  As the race went green,  Tim Ward flew from fifth starting spot, into second and then the two Arizona natives went to battle in the closing laps. Ward briefly took the lead on lap nineteen, only to have Thornton snatch it away in the final run to the checkers.  Thornton took the win, and tenth place starter Ward, had to be content with second.  Eric Elliott finished third, fourth went to Josh Gilman and Josh Most rounded out the top five.

Racing action continues next Saturday night, May 5, when it will be the first of the Super Saturdays presented by IMCATV.  The IMCA Modifieds will run Twin Qualifiers for $500 to win.  The Modified feature will then pay $1,000 to the winner.  The IMCA Hobby Stocks will also be vying for $500 to win.  All other classes will be in action as well.  Races for the month of May will have hot laps at 5:45, with racing at 6:30. 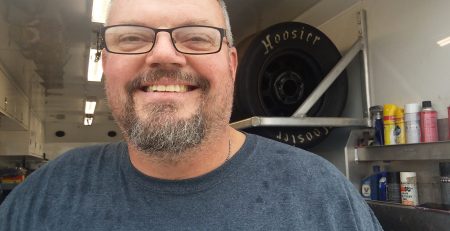 Mike Lineberry was the hard charger in his first trip this season to Boone Speedway. He’d like to qualify for... read more 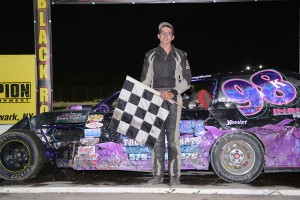