Saturday night’s races at the Boone Speedway found some new faces visiting victory lane in the Modified, SportMod and Mod Lite divisions.  One driver returned to the winner’s circle after only his Frostbuster win, and Hobby Stocks had a second time winner.

Things kicked off with the Mod Lite’s 15-lap feature.  Travis Stensland was holding down the lead as lap one was scored, when Terry Brown barrel rolled in corner two, bringing out a red flag.  Brown was okay.  When the race got back underway, Stensland continued to lead but Andy Hennigar was on his tail, and Charlie Brown was about to join in the fun as well.  The race continued green the rest of the way to the checkers.  Heavy lap traffic came into play in the final laps, but Stensland skillfully weaved through it, and took the victory—his first of the year.  Andy Hennigar finished as the runner up, and Charlie Brown held down second.  Josh May came from starting tenth to take fourth, and Bryan Zehm came from row six to finish in fifth.

The 18-lap IMCA Northern SportMod feature had a first time winner.  Tim Love put his ride in first place by lap two and was never challenged in taking his first victory of the season.  Cory Rose took home the runner up spot and young Jake McBirnie finished third. Ben Kates, last week’s winner, came from starting eleventh, to take fourth over Jerry Hinton who rounded out the top five.

There was a change in the usual running order of events as the Hobby Stocks ran next.  Mike Powell led the pack through the first handful of laps.  On lap six, the familiar car of Shannon Anderson took over, and a shuffling of cars behind him began.  Anderson was untouched the rest of the way to the checkers in scoring his second win of the season.  John Watson took the runner up spot, ahead of Mike Powell in third.  Fourth place finisher was Danny Watson and Dustin Graham finished in fifth. 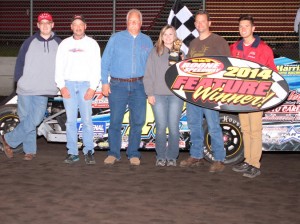 The IMCA Modified 20-lapper was lead the entire distance by winner Josh Truman.  Jimmy Gustin gave it his all in trying to catch Truman but had to settle for second after starting twelfth on the field.  Last week’s winner John Logue finished third, Denny Pittman started tenth and took fourth and Eric Elliott rounded out the top five.  The fast and furious race went flag-to-flag.  Gustin retains his point lead.

The IMCA Stock Car 18-lap main event had a pile up in corner four before the second lap could be scored.  When the race got back underway, veteran Robert Stofer was leading, but Donavon Smith was up to challenge in second.  Smith made his run on the bottom pay off a short time later, taking over the lead.  Point leader, Jay Schmidt put himself into contention as well, as he got around Stofer.  Schmidt tried the low side and then the high side, but at the checkers, had to settle for the runner up spot behind winner Smith.  In the waning laps, Josh Daniels made a strong run to finish in third, Jerry Gifford was fourth, and Stofer fell back to finish fifth.  This was Smith’s first win since the Frostbuster opener—his first of the regular point season.

Racing continues next Saturday night, May 24, with racing in all five classes.  Hot laps are 6:45 and racing at 7:30. 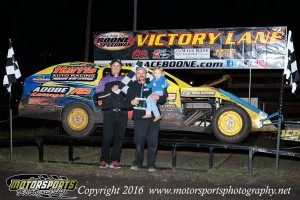 May 7, 2016 Racing won out over the raindrops at Boone on Saturday night, after last week's rain out.  The... read more

Don't forget to bring your power wheels to race this Saturday! Pedal karts will be there as well for... read more

RACEceivers mandatory for all divisions

BOONE, Iowa – RACEceivers will be mandatory for drivers in all divisions competing at the IMCA Speedway Motors Super... read more