It was a packed full night of racing at the Boone Speedway on Saturday with all regular classes in competition and the added bonus of having the Outlaw Mini Mods joining the program.

Jimmy Gustin made it two in a row by taking the Snap-on Tools IMCA Modified feature and Rod Richards returned to the winner’s circle in the Arnold Motor Supply IMCA Stock Cars.  Brandon Patava got his first ever win at Boone under his belt when he took the checkers in the Elmquist Towing IMCA Northern SportMod feature.  Shaun Wirtz made his first appearance in Victory Lane when he won the Pickett Salvage IMCA Hobby Stock main event, and Joel Huggins also won for the first time in the My Race Pass Mod Lites.  Val Urman got his second win this season when he took the checkers in the K1 Race Gear IMCA RaceSaver Sprint Cars, and the visiting class of Outlaw Mini Mods saw Nathan Kilwine take the victory, and completing the night’s racing it was once again the Mason and Agan duo in the two-person Cruisers.

Shadrach Sporaa, the Boone hometown racer, led the opening laps of the 20 lap IMCA RaceSaver feature until Val Urman came calling and took over at lap eleven.  Urman kept a tight hold on that lead the remaining laps to the flying checkers and the win.  Sporaa held the runner up spot, finishing ahead of third place Mike Houseman.  Fourth went to Paul Navratil, and Tyler Thompson was fifth.  The race went green to checkers.

Travis Stensland started on the pole of the 15 lap Mod Lite feature and immediately took the lead.  He had a lot of company early with Jeff Stensland and Joel Huggins pressuring him. It took just until lap four before Joel Huggins took over command of the ship and from then on, held the lead to the checkers and the win.  Travis Stensland finished as the runner up, Mike Kennedy finished a distant third, Jeff Stensland took fourth, and Bryan Zehm rounded out the top five. The race went caution free.

The visiting Outlaw Mini Mods ran a 12 lap event and this one found Nathan Kilwine from Glenville, Minnesota  putting his name in the record books as the first ever winner at the speedway in the Mini Mod class.  Kilwine fended off a couple of peeks by Clear Lake, Iowa’s Logan Brown who went second.  Third went to Bobby Daniels, Michael Bryant was fourth and Tanner Prehn took fifth.

There was a first time ever winner at Boone in the IMCA Northern SportMod division as Brandon Patava would lead the 18 lap event from flag to flag on his way to victory lane.  He was challenged in some three-wide racing by Dustin Lynch and Cam Reimers but held them off to take the win.  Lynch took the runner up spot, Reimers went third, Jake McBirnie came from twelfth to finish fourth, and Curtis Veber was fifth.

Jimmy Gustin repeated his win from last Saturday when he took the checkers in the IMCA 20 lap Modified feature.  Gustin capitalized on a late race restart, flying from third to first and then going on to hold the top spot the rest of the way to take the win.  Tony Cox took second, third was Chad Louk, Scott Hogan came from thirteenth to finish fourth, and Kenny Wyman, Jr. the driver from Goodyear, Arizona came from seventeenth to finish fifth.  Gustin, who started tenth, claimed his third win of the season.

There was a bit of mayhem in the 18 lap IMCA Stock Car feature as several mishaps disabled over a dozen cars.  Rod Richards was fortunate to avoid those disasters, and captured the win.  Richards, who took the lead at lap four, bested second place Andrew Burg.  Josh Daniels took third, Wayne Gifford started fifteenth and was fourth, and Brock Badger was fifth.  This was Richard’s second win at the track this season.

Rookie Miciah Hidlebaugh looked poised to finally get that elusive first win in the IMCA Hobby Stock 15 lap A main, but once again it alluded him as Shaun Wirtz snatched away the dream with just two laps remaining and then went on to take the win.  Hidlebaugh was again the bridesmaid in second place, Daniel Smith took third place, and Aaron Rudolph and Matt McDonald went fourth and fifth respectively.

Next Saturday, July 20, is another regular weekly program along with a SportMod Dash.  Hot laps are 6:15 and racing at 7. 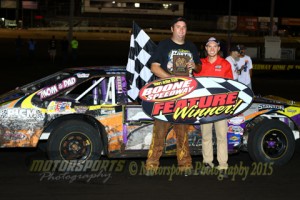 August 01, 2015 The Boone Speedway began it's final month of regular season racing on Saturday night.  It was a... read more 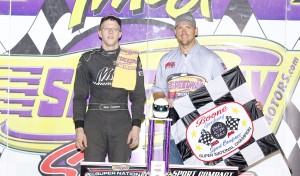 We have a great birthday party package for kids! It includes 6 kids and 2 adults for $125. Contact... read more