A record breaking 401 cars checked into the first night of the Wild Rose Casino Prelude to the Super Nationals on Saturday at the Boone Speedway.  IMCA Friesen Performance Modifieds, IMCA Sunoco Stock Cars, and Mach-1 IMCA Sport Compacts all had Prelude championship winners. The IMCA STARS Mod Lites began their qualifying, which will continue tomorrow.  Then they will run their Big Dance and crown the first of the 2022 Super Nationals champion.

Two “A” mains were run for the Mod Lites, the first qualifying the top ten for the inside row of tomorrow’s Super Nationals Big Dance, the second “A” taking the top ten to start in the middle row.  Jason Massengarb, Colona, Illinois took the honors in the first, and it was last year’s Super Nationals champion, Dillon Raffurty of Kansas City, Missouri winning the second and setting his sights on a repeat.

The Sport Compacts ran a 20 lap Prelude feature.  After Zach Bohlmeyer, the driver out of Beatrice, Nebraska ran down leader Jacob Schwab out of Crete, Nebraska, taking the lead at the halfway mark, it was all his race.  He had the field covered and took the checkers going away.  Schwab finished as the runner up, it was a former Super National’s Champion, Devin Jones finishing third, Kolby Sabin was fourth, and Mitch Bielenberg was fifth.

The IMCA Modifieds ran their 30 lap Prelude feature nonstop. Jimmy Gustin was the man in charge through lap fourteen, but in the meantime, it was the 4TW  of Tim Ward that had run the leader down, and then was able to make the pass.  From there on, Ward was gone as he pulled away and took the easy win…..matching his Prelude win from last year. Polesitter Jerry Flippo, Bakersfield, California made a late race pass to take second over Gustin in third.  Fourth went to Seminole, Texas racer, Cory Davis, and Lucas Lamberies, Clintonville, Wisconsin, was fifth.

The night cap was 30 laps of The Class too Tough to Tame, the IMCA Stock Cars.  Chanze Hollatz was impressive in his run from sixteenth starting spot to snag the win.  He caught and passed Texas racer Jeffrey Abbey and then pulled away….taking the checkers easily.  Abbey held on to second place, Dallon Murty also made an impressive run, starting eighteenth, and taking third.  Early leader Devin Smith came home in fourth, and Wamego, Kansas driver Brandon Conkwright was fifth.

Tomorrow will be Day #2 of the Wild Rose Prelude to the Super Nationals.  The IMCA Friesen Northern SportMods, and the IMCA Sunoco Hobby Stocks will run for their Prelude championship.  The STARS Mod Lites will complete their qualifying and then run their 2022 Super Nationals Championship feature. 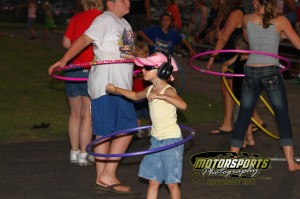 With only six weekly racing events remaining in the 2012 season, the battle for track championships are heating up... read more

BOONE, Iowa – Applications for  reserved seating for Friday and Saturday night shows, as well as for camping for the week... read more