It was season championships presented by Casey’s at the Boone Speedway Saturday night. Mother Nature tried her best to spoil the evening’s festivities, but she didn’t succeed.  The great track prep workers rolled it back in and racing went on as planned, although the green flag dropped one and a half hours late.

With the time factor taken into consideration, the heats were dropped, and Bs were run to determine the final qualifiers for the features that had the top twenty in points locked in.

The IMCA STARS Mod Lites ran their 20 lap feature first.  Joel Huggins grabbed the immediate lead from his outside front row starting spot, and from there on, never looked back.  He rocketed off from the field and won going away at the checkers.  Bryan Zehm finished a distant second, Randy Bryan was third, fourth went to tenth place starter Charlie Brown, and Joe Glick was fifth.  This was Huggins fourth feature win of the year, and he is the 2022 track champion.

The IMCA Friesen Performance Northern SportMods ran a 23 lap season championship feature.  Dustin Lynch started on the outside front row, and took command as the race went green.  He would weather that lead through four yellow flags, keeping the pack at bay, and take the win.  Jake Sachau came on strong late in the race and finished a close second.  Dusty Masolini bothered Sachau through much of the race, but had to settle for third.  Fourth went to rookie Braden Richards, and Tyler Heckert, Ottumwa, Iowa was the last qualifier, started twenty-fourth, and finished in fifth. This was Lynch’s first feature win of the year.  The 2022 track champion is Jake Sachau.

The IMCA Sunoco Stock Cars ran a 25 lap feature.  Jay Schmidt was looking strong, leading the way from the get go, holding off Devin Smith who was hot on his tail.  Schmidt’s great run would end on lap sixteen when lap traffic caused an incident that sent him to the pits….his night done.

When the race restarted, David Smith was now at the helm, chased by brother Devin the rest of the way to the checkers.  Josh Daniels finished a distant third to the Smith brothers, Michael Jaennette was fourth, and Austin Meiners rounded out the top five.  This was David Smith’s second win of the year. The track champion in the Stock Car division is Josh Daniels.

Veteran racer Russ Dickerson led the 25 lap IMCA Friesen Performance Modified feature from the start.  He wrestled his ride through a couple of pesky rough spots due to the earlier rain as he held back several challengers, first Jake McBirnie, and then twelfth place starter Jeremy Mills.  Mills took over the number two spot and really began applying the pressure with ten laps remaining.

Mills got the job done at lap 20, taking the lead, and then went home to the flying checkers and the win…his second this season.  Jake McBirnie got around Dickerson in the closing laps as they went second and third respectively. Randy Havlik and Paul Nagle rounded out the top five. Jake McBirnie took the track title for 2022.

Chad Rigby had seen a win slip through his fingers this season in the IMCA Sunoco Hobby Stock class.  However when their feature was completed it would find him taking his very first trip to Victory Lane at Boone.  He led from the start of the 20 lap feature, and though he had Mike Smith chasing him, taking peeks for a way around, he kept his cool and snagged that elusive first win.  Smith ran right behind the winner the entire race, but had to be content with the runner up spot this week.  Curt Reed finished in third place, it was John Watson taking fourth, and Solomon Bennett was fifth.  Mike Smith is the Hobby Stock 2022 track champion.

An added special race that was just culminated during the week was the Inaugural John Logue First Time Stock Car Winner Race.  To qualify, the driver must not have won a feature race in the Stock Car class.  The starting field would be lined up oldest to youngest, oldest starting on the pole and the youngest starting last.

The feature event went 20 laps.  Mike Smith, formerly from Jewell, Iowa, and now living in Kellogg, being the oldest qualified at 65 years old, started on the pole.  He leaped to the lead, and would lead every lap on his way to his very first IMCA Stock Car win.  He didn’t have it easy however, as Jeremy Mills, yes the Modified driver who had just won earlier, was piloting Johnathon Logue’s hot rod and threw everything but the kitchen sink at Smith.  It was all in vain however, as he could do no better than second.  Third place went to Scott Rice, fourth was Scott Olson, and Shay Woods was fifth.  Smith, who had a very successful career in the Late Model and Modified classes, drove the Stock Car usually raced by daughter Kylie Rawlins.

The regular season has drawn to a close at the Boone Speedway.  However there is much more racing ahead before the curtain falls.  Next Saturday night, August 27 is the IMCA Super Nationals Tune-Up, P1P Challenge, and Watermelon Classic.  Hot laps are 5 p.m. and racing at 6.  Then on September 3 and 4, is the Wild Rose Casino Prelude to the Super Nationals.  Then on the 5th of September the 40th Annual IMCA Super Nationals begins its six day run. 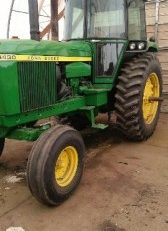 BOONE, Iowa – Promoter Robert Lawton and his crew continue to make preparations for the upcoming season at Boone... read more 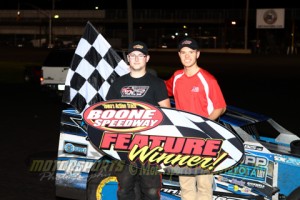 First time wins to Williams and May, R. Gustin, Murphy and Stanton repeat

June 13, 2014 Mother Nature tried,  but did not succeed, in stopping Saturday night racing at the Boone Speedway.  Boone... read more