It was season championship night at the Boone Speedway on Saturday night, ending the regular season of racing.  There were on track introductions in front of the grandstand of the drivers prior to each division’s feature event.  The night ended with the crowning of five track champions as well as season championship feature winners.

The Mod Lites ran first with an 18-lap feature.  Point leader Josh May was on the pole and Bryan Zehm sat along side.  Zehm leaped to the lead when the green flag flew, with May keeping close tabs at his rear bumper.  The two would race closely lap after lap, Zehm holding the upper hand until lap fifteen when May made the pass into the lead.  May took the win, his fifth of the season and also claimed the track championship. Zehm finished as the runner up, Dusty Masolini was third followed by Randy Bryan and Terry Brown in fourth and fifth.

The IMCA Hobby Stocks ran a 15-lap feature for their season championship event.  Eric Stanton got the jump on Shannon Anderson when the race began.  The second row starters, Tyler Pickett and Aaron Rudolph mounted a challenge on both drivers through much of the race.  Stanton held the lead but Anderson, Pickett and Rudolph were swapping positions.  Anderson established himself in the runner up spot with the laps winding down, put the hammer down and was able to make the pass into the lead with just a lap remaining.  He would then hold that lead and take the checkers first.  Stanton took the runner up spot, Pickett was third, Rudolph fourth and Matt Hudspeth rounded out the top five.  Eric Stanton was crowned the track champion.

The IMCA Northern SportMods ran a 20-lap feature for their season championship.  Point leader Eric Elliott led this one the entire distance, claiming his fifth feature of the year as well as the track championship.  Tara Longnecker got by Tim Love with a lap to go, as they were scored second and third respectively.  Randy Roberts came from starting ninth to finish in fourth, and Johnathon Logue completed the top five.

Trent Murphy and Jay Schmidt sat on the front row of the 20-lap IMCA Stock Car feature.  Schmidt took the lead immediately and was looking strong with Murphy hanging closely in second.  Donavon Smith opted to get in the mix after the halfway mark, taking over second place.  But he wasn’t done yet.  After challenging Schmidt for the lead for a couple of laps, he was able to take over the top spot with three laps remaining.  Smith was the victor on this night, Schmidt having to settle for second.  Trent Murphy finished in third, fourth was veteran Robert Stofer and Jerry Gifford was fifth.  Trent Murphy is the track champion for 2013.

An exciting 25-lap Modified feature ended the night.  Point leader Jimmy Gustin and Kyle Brown went at it for much of the race—Brown maintaining the lead on the topside, while Gustin went the lower route.  Gustin jumped up to the topside as the laps wound down, getting too high in turn four and jumping the cushion, bringing out the yellow.  When racing resumed, it was Russ Dickerson now in the hunt and riding in third was Mike VanGenderen, who had started back in fifteenth place.  Brown was able to hold the upper hand to the checkers and scored his first win at the track in 2013.  Dickerson took second, barely holding off a hard charging VanGenderen in third.  Fourth was Tony Cox who came from starting in row five, and Chris Webb finished in fifth.  Jimmy Gustin is the track champion.

Regular season racing has now been completed, but the racing at the Boone Speedway is far from over.  The 31st running of the IMCA Super Nationals begins on Monday, September 2, and it will conclude on Saturday, September 7.   Hot laps are scheduled for 2 p.m. each day, with racing to begin at 3.

Brown prevails in “lights out” action

May 24, 2014 The lights went out at the Boone Speedway on Saturday night, causing a delay during the Modified... read more 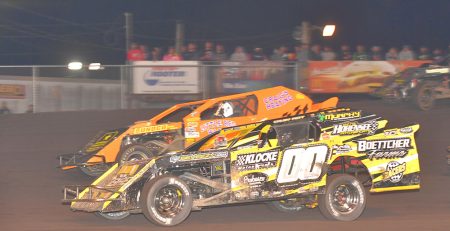