Exciting racing action continued at the Boone Speedway on Saturday night and this time with warmer and more pleasant conditions for the fans.  All five divisions had new winners on the season and one driver scored his first ever win.

The Mod Lite division found Dusty Masolini taking the lead as lap one was scored.  By lap four, Randy Bryan had worked his way from starting in row four, to run in second, and Cory Dennis and Joel Huggins tagged along in third and fourth.  Much of the race would continue in that running order until Bryan was finally able to make the pass with just a couple of laps remaining to take the lead.  Bryan then held off Masolini, a close second at the checkers, to score the win.  Third place went to Joel Huggins, who made a late race pass on Cory Dennis who was fourth and Bryan Zehm came from starting twelfth, to finish fifth.

Bruce Egeland  earned his first career victory in the IMCA SportMod feature, but nearly gave it away with a last lap bobble—due in part no doubt from an adrenaline rush!  He was able to gather it back in from near disaster and take the checkers for the first time ever.  Eric Elliott made a last 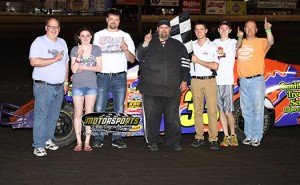 Bruce Egeland earned his first career victory in his IMCA Northern SportMod on Saturday, May 18, 2013, at Boone Speedway.

lap pass on Anthony Onstot as they finished second and third.  Tim Love and Rick Ringgenberg took the checkers in fourth and fifth.  Egeland makes the trip weekly all the way from Marshall, Minnesota to race at the Boone Speedway.

A King of the Hill race for the SportMods was held earlier in the evening, pitting the top two from the heats against each other in elimination rounds.  Brandon Williams beat out Cole Ferguson in the final round to take the win.  The race was sponsored by Harris Auto Racing.

The Modified feature was led start to finish by Joel Bushore.  Bushore pulled away from his competition, scoring his first win of the season at Boone in easy fashion.   Jake Durbin finished second, Jimmy Gustin was a close third after making a late race charge after starting in row five, and Randy Havlik took flight on the topside from starting fifteenth, to score a fourth place finish.  Cale Sponsler completed the top five.

Next was the always action packed IMCA Stock Car 18-lap feature, as cars ran three and four wide in the corners.  Eric Brown took the lead from rookie to the class, John Watson with a handful of laps in the books.  By lap seven, it was Donavon Smith making his way into second after starting in row six, and applying pressure to the leader.  Smith soon made the pass for the lead and pulled away in the closing laps, scoring his first win of the season by a comfortable distance.  The Murphy Brothers followed up in second and third.  Trent Murphy started twelfth on the grid and captured second, brother Michael took third.  Fourth went to veteran racer Robert Stofer and Eric Brown rounded out the top five.

The 12-lap Hobby Stock feature saw many interesting twists before it was completed.  Corey Adams fended off Curt Reed through lap nine, with Shannon Anderson wanting more while running third.  As the cars fought for position, contact was made between Adams and Anderson, sending them both spinning and bringing out a caution with just two laps remaining.  The restart found Curt Reed at the helm, which he was able to maintain to score his first victory at Boone this year.  Second went to Eric Stanton, third was Garrett Eilander, fourth was Tyler Pickett and Tim Barber was fifth.

Next Saturday, May 25 will once again be regular points racing in all five divisions.  Hot laps are 6:45 with racing at 7:30.  Then mark your calendars for Monday, May 27, when the IMCA Late Models come to town.  The annual running of the Deery Late Model Summer Series takes place.  Also on the docket are the IMCA Stock Cars, Hobby Stocks, SportMods as well as the Mod Lites.  Grandstands open at 2, hot laps at 4 p.m. and racing at 5.

Irvine on the pole

Another former winner on the pole is Brian Irvine, in the Sunoco Race Fuels Race of Champions for Stock... read more