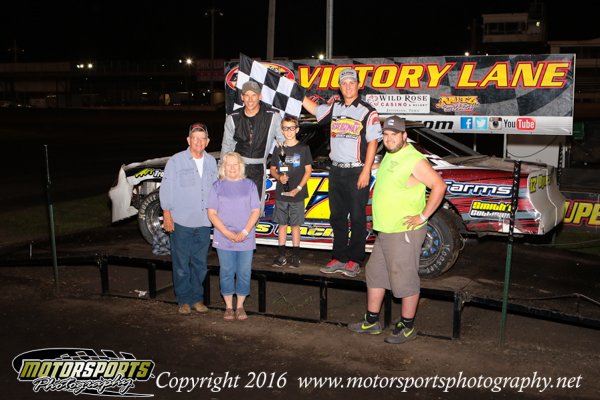 It was another fast paced night of racing at the Boone Speedway Saturday evening, with 137 cars packing the pits.  Two drivers would come away with their first wins at the track, while three others would repeat from earlier.  There was also an added bonus in a TiLUBE sponsored Modified challenge race, with one driver walking away with $1,200.

Josh May started eighth in the 15-lap Mod Lite feature and had the lead by lap four.  He never looked back from there on, stretching his lead and taking the comfortable win.  Pole sitter Kevin Grisham finished in the runner up spot, Randy Bryan was third, Joe Glick finished fourth, and last week’s winner Bryan Zehm, was fifth.  The race went flag to flag.

TiLUBE/TiLUBE Motorsports sponsored a “Last Man Standing” Modified challenge next.  It pitted the twelve drivers with the fastest lap times from the heats.  First time visitor to the track this season, Dustin Smith from Lake City, Iowa went home with the victory and $1,200.

The IMCA Northern SportMods ran their usual 18-lap feature.  Jake McBirnie took command of the race after getting by Jonathon Logue at lap five and keeping it to the checkers and the win.  Logue held down second place, just barely beating tenth place starter Adam Armstrong in third.  Fourth went to Daniel Tasler and Randy Roberts came from twentieth starting spot, to finish fifth.  McBirnie has won for the last three consecutive Saturday nights, and made it his sixth over all for the season.

The Class too Tough to Tame, the IMCA Stock Cars were up next for their 18-lap A Main.  It was led from start to

finish by Indianola, Iowa racer, Steve Byers.  Matt West chased Byers the entire distance, but could only muster a second place finish.  Josh Daniels took third, Devin Smith started twenty-second and surged by Wayne Gifford in the waning moments, as they went fourth and fifth respectively.  Byers won for the first time ever at the Boone Speedway.

The 20-lap IMCA Modified feature had some strange turn of events before it was all said and done.  Joel Bushore and Jon Snyder were running first and second through the halfway mark of the race when an ailing car was trying to exit from the track, right in front of the two that were running the high side.  The collision was unavoidable and it took both Bushore and Snyder out of the game.  This handed the lead on the restart over to Gatlin Leytham with Al Wolfgram, Eric Elliott and point leader Mike VanGenderen, close at hand.  Just a lap later, Elliott made contact with Laythem and Wolfgram, sending them spinning into the infield, and he found himself black flagged for the incident.  With just three laps remaining, VanGenderen was now in the lead with Russ Dickerson breathing down his neck. VanGenderen was able to hold the lead at the finish line, by mere inches, and took the win.  Dickerson had to be content with second place.  Third was Chris Webb, John Logue, sporting a new car, started twenty-third, and finished fourth and Tony Cox completed the top five.  This was VanGenderen’s fifth win of the season.

Racing concluding with the running of the 12-lap IMCA Hobby Stock feature.  The cars did not complete the first lap before the race was halted.  In trying to avoid hitting two cars sitting in turn three, Steven Doss rolled his car off the top of the corner, bringing out the red flag.  He was okay.  When racing action got back underway, Dustin Lynch quickly got to the lead and held firmly to that coveted spot the remainder of the race to take the win.  Chad Legere finished in the runner up spot, third went to Shaun Wirtz, fourth to point leader Eric Stanton, and Tyson Overton was fifth.  This was Lynch’s first win at Boone this year. 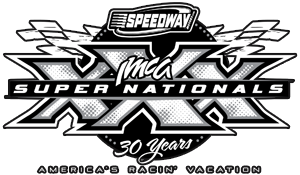 An event record 870 cars will have competed at this year’s Super Nationals by the time the final checkers... read more

Elmquist Towing Company and owner Jake Elmquist are excited about the 2014 Race Season at the Boone Speedway.  They... read more