The Boone Speedway held it’s third night of regular season points racing on Saturday night.  One driver was back in his familiar spot in victory lane, while all other classes found winners for the first time this year.  It was also a night when all the mothers were honored by being handed a red carnation for Mother’s Day, as they passed through the grandstand gates.

The first feature was the Mod Lite division . Bryan Zehm dominated the entire race on the way to his victory. Joel Keenan chased him across the finish line to take second. Randy Bryan came from the sixth row to take third over Ed Zehm and Andy Hennigar started in row twelve to score fifth.

The IMCA Northern SportMod winner stepped into victory lane for the first time this year.  Brian Miller led the entire 18-lap event. He fended off the late race challenges of Scott Davis, even after several restart situations caused by the yellow flying. Davis was scored in second followed by Randy Roberts, Eric Elliott and Jerry Hinton.

Earlier in the evening, after the SportMod heats, a special King of the Hill for this class was run. The first and second place finishers from the heats were involved. The final two remaining cars were Eric Elliot versus Scott Davis. Elliott was the victor.

The IMCA Modified feature was an eventual walk away. Jimmy Gustin passed leader Jon Snyder and pulled away for his first win at 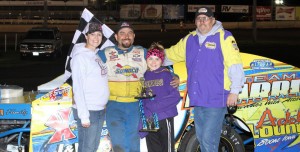 Jimmy Gustin took his first win of the season at Boone Speedway in the IMCA Modifieds on Saturday, May 12, 2012.

The IMCA Stock Car feature found another new winner to place in the books. Jay Schmidt took the lead from Cory Bushnell by lap five, never to relinquish it. Bushnell fought hard at the final run to the checkers but had to settle for runner up. Wayne Gifford came from starting in fifteenth to capture third. Donavon Smith made it into the fourth place from starting in row nine and Gary Bass put his car on the topside to nab fifth from starting in row six.

Right before the IMCA Hobby Stock feature, the youngsters were invited to hop in their favorite Hobby Stock driver’s car, for a circuit around the track. The 12-lap race followed and this one left little doubt after lap five who the winner would be.  John Watson grabbed tbe lead from Cory Adams at that lap five, pulled away and took another win. Watson, who has seen many wins over the past couple of years took the win over Adams. Third was Eric Stanton who started in row six, Austin Luellen was fourth and Aaron Roudolph, fifth.

BOONE, Iowa – Harris Auto Racing continues title sponsorship of one of the premier events for Modifieds, during the... read more

July 10, 2010 It was another great night of racing at the Boone Speedway this past Saturday night with 131... read more