The Boone Speedway saw all repeat winners on Saturday night.  Jimmy Gustin grabbed the win in the IMCA Modified class, veteran racer Robert Stofer took the honors in the IMCA Stock Car division, Jake McBirnie returned to Victory Lane in the IMCA Northern SportMods, Aaron Rudolph made it two in a row in the IMCA Hobby Stocks, and Charlie Brown was victorious in the Mod Lite division.

Jake McBirnie found his way back to Victory Lane in the IMCA Northern SportMod class.  McBirnie raced side by side with then leader Kevin Yearington for several laps before finally taking over the lead at lap eleven.  From there on McBirnie distanced himself from the competition, and swept home to a comfortable win.  Yearington held on to the runner up spot, Thomas Egenberger just beat Johnathon Logue at the stripe as they went third and fourth respectively, and Curtis Veber completed the top five.  The win marked McBirnie’s fifth trip to the winner’s circle in 2018 at the speedway.

The IMCA Stock Cars put on their usual entertaining feature event.  Robert Stofer started eighth and took over as captain of the ship at lap two and was content to let the cars behind him duke it out for position as he rode comfortably in the lead.  There was a spirited battle brewing among the contenders running second through fifth spots.  Scott Davis, Trent Murphy, Jay Schmidt and Tyler Pickett were battling one another for position as the laps wound down, and it was anyone’s guess as to the outcome in the closing moments.  As Stofer took the checkers, it was Trent Murphy getting the upper hand to score the runner up spot, Jay Schmidt started twelfth and finished in third place, Scott Davis won the battle for fourth, and Tyler Pickett took fifth.  This was Stofer’s second win of the year.

Robert Avery was the early leader of the 20-lap IMCA Modified feature, but Jimmy Gustin wasted no time in getting to his tail by lap four.  Just two laps later, Gustin made the pass for the lead and then stretched it out.  He was leading by half a lap when that was all erased when a yellow flew with just three laps remaining.  It didn’t bother Gustin however, as he motored away from the field on the restart, and swept to the comfortable win.  Tony Hilgenberg finished second, third was early leader Robert Avery, and Eric Elliott beat out Joel Bushore as they finished fourth and fifth respectively.  This was Gustin’s second win of 2018 as he also won the season opener.

Aaron Rudolph made it two wins in a row by snapping up the IMCA Hobby Stock 12-lap main event.  Rudolph worked his way from tenth starting position to catch leader David McQuiston.  With just two laps remaining in the contest, Rudolph made the pass and stole the win.  McQuiston had to be satisfied with the runner up spot, Jack Phillips finished in third, fourth was John Watson, and Todd Bass started in twenty-fourth spot…tail end Charlie, and finished in fifth.  Rudolph took win #3 for the season.

The night cap was the running of the 2-person Cruiser cars.  Once again, it was the duo of Mason and Agan returning to the podium as they captured back to back wins.

Next Saturday night is season championship night and the crowning of track champions.  The top 20 in points will be locked into their respective features and if need be, the field will be completed through qualifying races.  Hot laps are 6:45 and the green flag drops at 7:30. 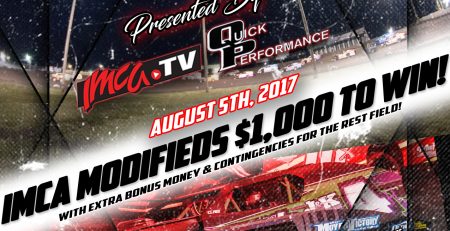 Who's gonna take it all?   $2200 plus contingencies on the line this Saturday night at Boone Speedway for the IMCA... read more

BOONE, Iowa – The deadline for drivers to pre-register for the IMCA Speedway Motors Super Nationals has been extended... read more