It’s Roberts in a thriller at the checkers, Smith, Olson, Knutson, and Glick also take wins

It’s Roberts in a thriller at the checkers, Smith, Olson, Knutson, and Glick also take wins

The racers came out in full force for Saturday night racing at the Boone Speedway with 169 cars packing the pits.  All IMCA regular classes would find first time winners on the season. The IMCA STARS Mod Lites were in town for a National event series race, as part of the Corn Belt Clash.  That winner was determined after the race through a disqualification. Also running in exhibition were the two-person cruisers, with Don Mason and Jason Miller taking home the honors for the win.

The IMCA STARS Mod Lites had a great field of 30 cars for their National event.  Austin Gray would lead the entire 25-lap feature, pulling away to a sizeable lead to take the checkers.  Joe Glick chased the leader for most of the race, but finished a distant second.  Third place finisher was Josh May, Mike Kennedy started tenth, and crossed the finish line in fourth place, and Bryan Zehm was fifth at the checkers.  However, there was a couple of post race disqualifications that would change up the official finishing order. Gray was disqualified as was fourth place finisher Mike Kennedy.  This handed the win over to Joe Glick, moved May into second place, Zehm to third, Jon Braathun took fourth, and Cory Sonner came all the way from twenty-first starting spot, to be awarded fifth place.  This was Glick’s first win at the track in 2021.

Forty-two IMCA Northern SportMods were in competition, calling for two B Mains to whittle the starting field for their 18-lap A main down to 24 cars.  Cory Pestotnik started third, and had the lead by lap three. Cam Reimers tucked in behind him and became a constant threat as the race wore on.  Several yellows flew during the event, and a caution at lap fifteen became leader Pestotnik’s undoing.  As the race restarted with Pestotnik in command, he had Reimers and now Tony Olson lurking close behind.  By lap sixteen, Olson had made the pass and was scored the leader.  He would hold that top spot the remaining distance to the flying checkers and the win.  The closing moments also saw Johnathon Logue slip by Pestotnik to capture the runner up spot.  Following third place Pestotnik was Cam Reimers in fourth, and Izac Mallicoat in fifth.  Tony Olson started twelfth on the field to take home his first ever feature win at the speedway.

It was a thrilling finish to the 20-lap IMCA Modified feature that saw some amazing crisscross moves during the race.  Nick Roberts started sixth and had the top spot by lap four, content to let the pack behind sort itself out.  Tim Ward came from twelfth starting spot, into second and began applying pressure quickly, and Kyle Brown was also in the picture.  Then the show really began when Roberts and Ward made some spectacular crisscross moves out of turn two, and Brown sticking his nose into the mix as well.  Several more cross over moves had the crowd excited as the laps wore down, with Roberts always managing to come out on top.  He would hold on to take the checkers in the closing moments, with Ward taking a close second, and Brown right there in third.  Fourth went to Jake McBirnie who started eleventh, and Cory Sauerman rounded out the top five.  Roberts took his first win at the track for the 2021 season.

It was definitely the Smith brothers show in the IMCA Stock Car 20-lap feature event.  David Smith chased down early leader Anthony Goldsberry to take over the top spot just after the halfway portion.  Then brothers Devin and Donavon both fell in line behind.  David would pull away in the final laps to take the easy win, trailed by Devin Smith in second, followed by brother Donavon in third place.  Justin Nehring finished in fourth, and Jeff Mueller completed the top five.  The race went flag to flag.

The IMCA Hobby Stocks also completed their 15-lap feature without a caution.  Carter Koop led the opening laps of the race, but quickly had Eric Knutson to contend with.  The two crossed the finish line on lap seven in a near dead heat, but by lap eight, Knutson had gained the upper hand.  The closing laps found Knutson distance himself from the pack, and take a comfortable win.  It was a fight to the finish behind him however of a pack of three cars.  Eric Stanton, Carter Koop, and Solomon Bennett went 2-3-4 respectively in a very close finish.  Aaron Rudolph rounded out the top five.  This was also Knutson’s first regular season win, though he won the early April Frostbuster special.

Please note that next week, June 5, will begin the summer race schedule, with hot laps at 6, and racing at 7. 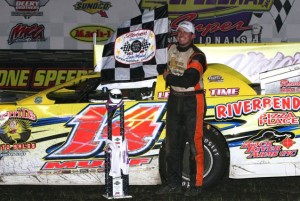