It was week #2 of the weekly racing series at the Boone Speedway on Saturday night.  There were 164 drivers checked in for the racing action, and two drivers would step into victory lane for the very first time.

Cody Yaw dominated the entire 15 laps of the IMCA STARS Mod Lite feature, leading all laps on his way to victory.  Yaw finished well ahead of second place Bryan Zehm.  Pole sitter Joel Huggins finished in third place, Jon Braathun was fourth, and Mike Kennedy was fifth.  Yaw got career win number two under his belt at the speedway after taking that first ever career victory just last August at the track….though through a penalization of the top two finishing cars.   This one had to taste sweeter.

It took several tries before the IMCA Karl Chevrolet Northern SportMods were able to get their feature started, plus two more early yellows would mar the event.  Lonnie Hodges led the early portion of the 18 lap race but 15 year old Izac Mallicoat slipped by for the lead on lap three.  Tenth place starter Johnathon Logue was on his tail by lap four and would throw challenge after challenge at the youngster. Then Chowchilla, California driver Kaylin Lopez threw his hat into the ring to make it a tight three-way battle.  Mallicoat wasn’t fazed however, and took the checkers for his first career win.  Logue finished as the runner up, Lopez was a close third, followed by Cory Pestotnik in fourth and Curtis Veber rounded out the top five.

Denny Pittman looked strong in the early portion of the IMCA Modified feature, leading easily in the first handful of laps.  Meanwhile, sixth place starter Cory Sauerman had gone up top and was reeling the leader in.  Sauerman took command on lap nine, and from there on it was all his race as he motored home to victory.  Jeremy Mills, who started tenth, took advantage on a green-white-checkered finish, gaining two positions in the closing moments to take the runner up position.  Kelly Shryock was third, Mike VanGenderen was fourth, and twelfth place starter Tim Ward finished fifth.

Multi-time track champion Donavon Smith got things back on track, winning the flag-to-flag IMCA Sunoco Stock Car feature.  Smith took over the top spot after then leader Robert Stofer bobbled and fell back in the pack with eight laps to go in the 20 lap contest.  Brock Badger and Michael Jaennette did battle behind Smith, with Badger taking second just ahead of third place Jaennette at the finish line.  Scott Davis was fourth, and Devin Smith, who had previously won the Frostbuster and last week’s season opener, completed the top five.

The night ended with another driver getting his first ever win at the Boone Speedway when Madrid, Iowa racer Chad Rigby took the checkers in the 15 lap IMCA Sunoco Hobby Stock feature.  Rigby started on the outside front row, and immediately took the lead.  He would lose his lead briefly at lap ten when Solomon Bennett got the advantage at the flagstand, only to have Rigby come right back into the lead.  The final five laps were all Rigby’s as he flew under the checkers for the win.  Bennett took the runner up position, Wayne Gifford was third, fourth went to Eric Knutson, and Curt Reed was fifth.

Next Saturday, April 24 will be week #3 of weekly points racing.  Hot laps are scheduled for 5 with racing at 6.

The FUN never SETS in Boone! Get the FUN started with Happy Hour every Saturday in May during the... read more 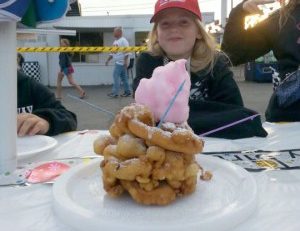 Happy Birthday To You!!

Hey kids, Celebrate your birthday at the race track. Check out below for all the details read more