There was extra money on the line Saturday at the Boone Speedway where it was the Watermelon Classic along with the P1Performance Challenge for the IMCA Modified.  There were 185 cars checked into the pits that provided close racing action all night long. The draw/redraw show also held an extra incentive for the IMCA Stock Cars, with $1,000 to win and a qualifier for the upcoming IMCA Super Nationals IMCA Stock Car All-Star race.  Another bonus was a watermelon presented to all feature winners!

The P1Performance IMCA Modified Challenge race was set through time trials, and then heat races, with thirteen drivers qualifying for the 15 lap feature event that paid $1,250.  The top two in the six heat races were locked in and with one tie, a thirteenth driver was added.  Those drivers were brought in front of the grandstand for their draw for starting positions.

Regular feature racing began with the My Race Pass IMCA STARS Mod Lites and their 15 lap main event.  Mike Kennedy started on the outside front row, and grabbed the lead as the race went green.  Randy Bryan however, was quickly up to challenge.  Kennedy held back Bryan’s attempts until lap eleven when he made his persistence pay off, and made the pass for the lead.  From there on out, it was Bryan’s race as he took the checkers.  Kennedy held the runner up spot, third went to Bryan Zehm, Joe Glick was fourth, and Josh May was fifth.  This was Bryan’s first feature win of the year.

Thirty-nine Elmquist Towing IMCA Northern SportMods were in the house and after two B mains, the starting field was whittled down to twenty-four cars for their 18 lap feature.

Izac Mallicoat started from the pole and grabbed the lead as the race went green.  Johnathon Logue started beside him and tucked in to run second.  Mallicoat held off Logue’s advances until lap seven, when he took command.  Logue didn’t have it easy however, as Jake Sachau was soon to be chasing the leader and was hounding him left and right.  The final six circuits found the two running side by side at times, but Logue continued to be scored the leader as they passed the flagstand as the white flag waved.  Sachau gave it one final shot as they came out of corner four looking at the checkers, but it was Logue by inches over Sachau in a near photo finish.  Mallicoat finished third, Kaylin Lopez was fourth, and Eric Elliott, in his return to racing in quite sometime, started eleventh, and finished fifth. Logue made this win number nine on the season.

The IMCA D & E Outside Services Modifieds ran their regular 20 lap feature race next, and it also paid $1,250 to win. The healthy field of 46 race cars checked in to the pits, also required two B Mains to get the starting field down to 24 cars. Jake McBirnie was quick to grab the lead from his outside front row starting spot.  The closing laps found Tim Ward throwing a few challenges at the leader, but come up short as McBirnie would lead all laps on his way to feature win number five.  Ward finished a close second, Shane DeVolder started twelfth and took third place, fourth went to Paul Nagle, and eleventh place starter Joel Rust completed the top five.

The Arnold Motor Supply $1,000 to win IMCA Stock Car 20 lap feature had to have 49 cars whittled down to 24 through two B Mains. Last week’s winner Scott Davis drew the lucky pole starting spot and kept the top spot as the green flag fell.  He continued to keep his ride on the bottom of the track, leading the field as the race wore on.  The final handful of laps had Donavon Smith barking at his heels, with seventeenth place starter, Tom Berry, Jr. now in third spot.  Berry made his high side run and diamond run out of corner two work to perfection in the closing laps, grabbing the lead at lap nineteen, and keeping it to the flying checkers.  Davis had to be content with second place this week, Donavon Smith finished third, Troy Jerovetz in fourth, and Johnathon Logue was fifth.  Berry, who was doing double duty also running the Modified class, chalked up his first ever Stock Car feature win at the track, and qualified for the IMCA Super Nationals All-Star Stock Car race.  He was already qualified for the Modified All-Star race.

Thirty-two IMCA Pickett Salvage Hobby Stocks required one B Main to set their 24 car 15 lap feature race that put a night cap on the racing action.  Mike Smith would lead this one from flag to flag to secure his fourth win of the year.  Wayne Gifford pestered Smith for much of the race, peeking for a way around, but could do no better than finish second.  Eric Stanton took third place, Curt Reed was fourth, and Seth Janssen rounded out the top five.

Next Saturday, August 28, is Season Championship night, with the crowning of track champions in the IMCA Modifieds, Stock Cars, Northern SportMods, Hobby Stocks, and the STARS Mod Lites.  Hot laps at 6, with racing at 7. 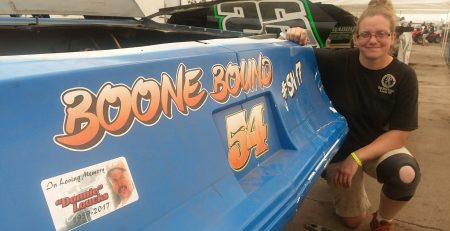 Long tow Allison Pierce made the 970-mile trip from Corning, N.Y., to make her Super Nationals debut during the... read more