Schmidt takes it to victory lane in the IMCA Stock Cars

Schmidt takes it to victory lane in the IMCA Stock Cars

A brief shower didn’t interfere with the racing at Boone on Saturday night, but just provided some natural watering to the already sealed track.  It was quickly “farmed” and racing began on schedule.  Three new faces greeted victory lane for 2013 and two returned from earlier victories.

The Mod Lite feature found Charlie Brown grabbing the lead from Jason Whitehead at lap three–a lead he would never relinquish.  Bryan Zehm came from row six to finish as the runner up, and Randy Bryan came from row five to finish in third.  Fourth went to Josh May and Mike Kennedy completed the top five. This was Brown’s first win at the track this year.

The regularly scheduled 18-lap IMCA SportMod feature would end at lap 10 under the time limit rule, as yellow after yellow continued to fly.  Randy Roberts didn’t let the many restarts deter his lead however, as he led from lap three until the race was called complete at lap ten.  Lynn Brockett scored the runner position and Cory Rose finished in third.  Early race leader Darren Huntley stayed near the front to finish fourth and fifth went to Tara Longnecker who started in the sixth row.  Roberts scored his second win in 2013 at the Speedway.

There was no lack of continuous action in the IMCA Modified feature!  The father/son duo of David and Kyle Brown fought it out in the early going with the two swapping the lead a number of times.  A dog fight ensued in the later portion of the race with several cars fighting for the lead, but it was Jammin’ Jimmy Gustin who would come out the winner in this one.  Gustin, who had started thirteenth, was followed by fourteenth starter Todd Shute in second.  Third went to Jon Snyder, Kyle Brown finished fourth and Shay Woods was fifth.  Gustin returned to victory lane after winning the Frostbuster back on April 6th.

It was an exciting finish in the 18-lap IMCA Stock Car A main event.  Veteran racer Robert Stofer led the pack at the drop of the green and was looking to be the man to beat.  Behind him, Mike Goldsberry and Jay Schmidt were dueling it out with Schmidt finally snatching second place as the laps wound down.  A green-white-checkered situation set up the exciting conclusion when Schmidt 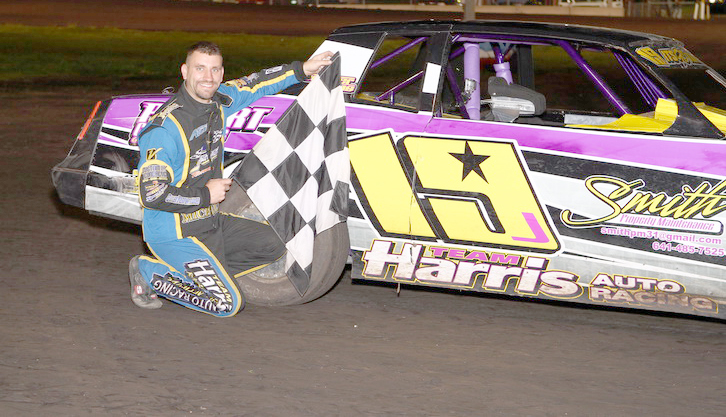 Jay Schmidt was able to pull off the pass out of corner three on the run to the checkers, sealing the win in his IMCA Stock Car on Saturday, June 1, 2013, at Boone Speedway.

was able to pull off the pass out of corner three on the run to the checkers, sealing the win.  Schmidt, sporting a new car, took his first win at the track this year.  Stofer was the runner up, third went to Goldsberry, and Bod Daniels and Aaron Parmer finished fourth and fifth.

The 12-lap IMCA Hobby Stock feature polished off the night’s racing.  Andrew Burg led all but the final two laps of this one, when Eric Stanton, who started tenth, pulled off the pass for the lead and the subsequent win.  Burg had to settle for second, third was Tyler Pickett, fourth went to Aaron Rudolph and Garrett Eilander started thirteenth and took fifth place.  This was Stanton’s first win of 2013 at the track.

It will be back to regular racing action again next week, June 8 with racing in all five divisions.  Hot laps are 6:45 and racing at 7:30

This year at the IMCA Super Nationals, there will be a free bus shuttle.  It will travel between the... read more

If you would like to be a Racing Rascal, please email your Name, Age, Address, Phone number and Email... read more