It was Season Championship night at the Boone Speedway Saturday.  Five drivers won features in their divisions and five drivers went home with a track championship title.  The top ten in points were locked into the feature, and a dash determined their starting spot for their respective A mains.  Last chance qualifiers in each division for those eleventh on back in season points, filled in the starting field for each class.

The first class to hit the track for their feature event was the My Race Pass Mod Lites in a 20 lap contest.  This was the tightest points battle of the evening with only two points separating Randy Bryan and Mike Kennedy for the track championship crown.

Mike Kennedy earned the pole starting spot by winning the Mod Lite dash.  When the green flag fell, Kennedy shot off to the lead and would then lead all laps on his way to the win.  Kennedy wasn’t hindered by the pesky caution flags that flew, and would drive off from his competition when the race returned to green.  Joe Glick finished as the runner up, Bryan Zehm took third place, fourth went to Randy Bryan, and Tim Glick was fifth.  This was Kennedy’s second win of the season, and earned him a track championship as well….finishing one slim point ahead of Randy Bryan in the points chase.

The Elmquist Towing IMCA Northern SportMods ran 23 laps in their championship feature.  Johnathon Logue had the track title all wrapped up before he even started the main event, but he would also go on to dominate the feature as well, leading the entire race and winning comfortably ahead of the rest of the field. Dusty Masolini chased Logue the entire distance, but finished a distant second.  Robert Moore came from eleventh starting spot and finished in third, fourth went to Dustin Lynch, and Cory Pestotnik completed the top five.  This was Logue’s sixth win of the year at the track.

Up next was 25 laps of D & E Outside Service IMCA Modified fury. Jake McBirnie sat along side his new brother-in-law, Tim Ward for the start of the race.  Ward had the track title wrapped up before the race began, but it was a battle between the two for much of the race…McBirnie holding the upper hand.  Ward’s challenge for the lead disappeared when he slipped off the rim of the track, regained control, but losing several positions.  As the race continued on, McBirnie would pull away and take the checkers well ahead of the competition.  Paul Nagle finished as the runner up, third went to Cory Sauerman, Cody Laney was hard charger, coming from thirteenth to finish fourth, and Tim Ward rounded out the top five.  This was McBirnie’s second feature win of his rookie career in the Modified class.

The IMCA Arnold Motor Supply Stock Cars went twenty-five laps for the feature event.   David Smith and brother Donavon Smith would finish one-two in this contest. David Smith passed Jay Schmidt on lap two, and from there on never looked back on his way to the win.  Donavon Smith finished in second place, third went to Josh Daniels, Scott Davis was fourth,  and Jay Schmidt was fifth.  This was David Smith’s first win at Boone this year.  Donavon Smith is the 2020 track champion.

The night cap was twenty laps of IMCA Pickett Salvage Hobby Stock feature event racing.  Dylan Nelson and Eric Knutson waged a good battle for the lead, swapping the top spot a couple of times.  The tight racing resulted in contact between the two, with Nelson having to exit the track after Knutson went spinning in the incident.  When the race restarted, Aaron Rudolph found himself inheriting the lead.  He would hold that top spot the remaining distance to the checkers and the win.  Shane Butler started eleventh and finished second, Mike Smith was third, fourth went to Erik Knutson, and twelfth place starter William Klosterman was fifth.  Rudolph, who started tenth, took his first visit to victory lane this season.  The Hobby Stock track champion is Dylan Nelson. 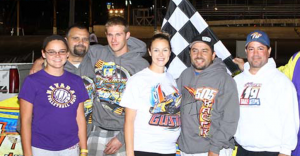 Gustin to the checkers first at Boone

August 11, 2012 The count down to Super Nationals brought 186 cars to Boone Speedway on Saturday night. There was... read more

Zylstra's is offering coupons for $2 off adult admission just by stopping in their store at 1930 East 13th... read more