Action started a little early at the Boone Speedway on Saturday night when threatening weather suddenly appeared.   A mist from low hanging clouds fell during the early heat races but caused no problems.  From the heat action, it was directly into feature racing with no need for the track to be farmed.

The Dwarf/Mod-Lite 15-lap A-main started the feature racing.  Joel Huggins led the early circuits with Randy Bryan close on his heels.  With less than a handful of laps remaining, Bryan made the move past Huggins and into the lead.  Bryan would go on to capture his first feature win of 2011 at Boone.  Andy Hennigar slipped past Huggins in the final lap as they finished second and third respectively.  Fourth went to Jeff Stensland, and Mike Kennedy was fifth.

The IMCA Northern SportMods put a new winner’s name in the books as well.  Laurel, Iowa driver, Racer Hulin piloted his ride to victory over Cody Hennings, who finished in the runner up spot.  Point leader Scott Davis finished in the third position, while Geoff Olson took fourth place 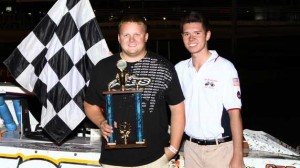 Racer Hulin motored his way to victory lane in the IMCA Northern SportMod division at Boone Speedway on Saturday, June 25, 2011.

and Eric Elliott rounded out the top five.

The IMCA 20-lap modified feature came to the track next.  Scott Simatovich led the early laps until Randy Havlik  made the pass into the top spot.  Havlik never looked back after gaining the lead, and took his second win at the track this season.  Joel Bushore took second over Scott Simatovich in third.  Fourth went to Cale Sponsler and Jake Durbin came home in fifth.

The third new winner emerged from the 18-lap stock car feature.  Veteran Indianola, Iowa driver, Jeff Johnson, led the entire race to seal his first win of 2011 at the Boone Speedway.  Larry Crocheck and Wayne Gifford jockeyed for position behind Johnson for much of the race.  Gifford won that battle to finish as the runner up and Crocheck took third.  Fourth went to Donavon Smith and Michael Jaennette finished fifth.

The final feature of the evening was the 12-lap IMCA hobby stocks.  Bill Atcheson and Brandon Brinton jousted for the lead for most of the race as they survived several on track incidents.  On the final lap, Atcheson suffered a tire going down on the backstretch, which in turn caused second place car, Brinton to slow.  Michael Murphy shot past both cars to take the win at the flagstand.  This was Murphy’s seventh victory at the track this year.  Brinton took the runner up spot and Atcheson held on to take third.  Fourth went to Tony Cox and Eric Stanton took fifth.

Regular racing continues next Saturday night, July 2nd with point racing in all five divisions.  It will also be Wal-Mart night and bike races for the youngsters.  Make plans to attend.

Fan Zone will be popular locale during Super Nationals Week

BOONE, Iowa – Fans looking to meet and greet with their favorite drivers, and maybe score an autograph or... read more

BOONE, Iowa (Sept. 3) – Tyler Frye got the lead back just in time to get himself a spot... read more